Once we started seeing real growth, we were excited to be over the hump. Unfortunately, the hard work had just begun.

And I had every right to be; this was a big milestone.

Hitting Product/Market Fit meant that we were no longer scrambling to build something of value.

We had it. People were buying it. They were loving it.

And now, our job was to scale it.

Over an after-work beer, I excitedly told my friend — an entrepreneur several years (and a couple of successful companies) ahead of me — how great it felt to be at this point, and how eager I was to finally be able to turn our grand plans for Groove into reality.

The features we’d get to build, the sales channels we’d dominate, the forever-up-and-to-the-right growth chart we’d undoubtedly ride to the very top.

I was so pumped up that when he looked at me over his glass with a knowing eye and said “listen, that’s awesome, but whatever you think you’re going to do over the next year, divide it by three,” it barely even registered.

I ignored it, the conversation moved on, and within a few minutes, I had completely forgotten about his remark.

In fact, I didn’t think about it again for months.

Until last week, when I met my friend again; this time, for lunch.

As we filled each other in, I was far less animated than I had been in our meeting many months before.

I was upbeat, and I was excited about our direction, but my enthusiasm was dampened: our growth was strong, but it had brought with it new challenges that I was totally unprepared for, and it felt like new obstacles crept up every day.

He knew exactly what I meant. He had seen it all. And over the next hour, he shared his own invaluable experiences and helped me break through many of my own mental blocks.

I left that lunch with new ideas that helped Groove overcome some of our most frustrating scaling challenges.

As I thanked my friend, he got up to leave.

But not before he shot me a sly grin and a friendly, well-deserved “I told you so.”

Scaling Is The Hardest Thing We’ve Ever Done 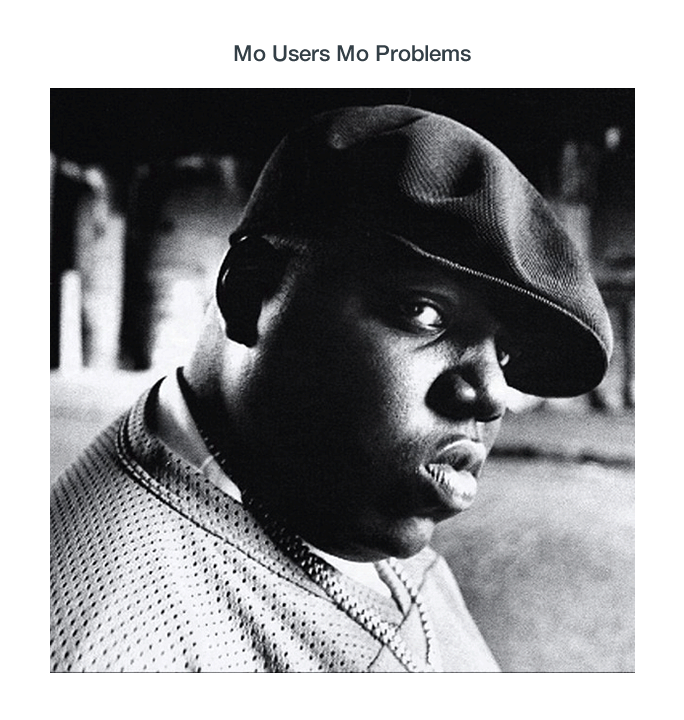 As we sit on the cusp of $50,000 in monthly revenue, Groove looks a whole lot different than we did even a few months ago.

Our short-term goals are different.

Our day-to-day priorities are different.

And most importantly, our challenges are different than they’d ever been.

Building a product that people loved was hard, there’s no doubt about that. It took us a long time, and a lot of money, with a number of setbacks and near-death experiences along the way.

To an extent, I knew how hard that would be. I had done it before, and I had some idea of what to expect.

But my last company was acquired before we had to scale. This next stage was completely uncharted territory for me.

And now, as I look back at what we’ve battled, learned and overcome in the past several months, and every battle yet to be fought, one thing is clear to me: scaling is, without a doubt, the hardest part of building a business.

We’ve hit literally hundreds, if not thousands of new obstacles as we’ve worked to scale Groove. But most of them fall into one of three distinct categories:

I cringe when I read Derek Sivers’ story about the cost of an unclear email:

At my last company I had about 2 million customers.

When writing an email to everyone, if I wasn’t perfectly clear, I’d get 20,000 confused replies, which would take my staff all week to reply back to each, costing me at least $5000 plus lost morale.

We don’t have two million customers, but I sure as hell feel his pain.

When we had 100 users, rapidly building new features was easy. So was testing major product changes, or launching a third-party integration.

We just did it.

When a couple of users ran into issues because of their browser of choice or another plugin, we simply helped them work through it.

Now, we have thousands of users using a host of browsers, apps, email providers, operating systems and other variables that all impact the way Groove functions.

Launching a new feature without ensuring that it works for the majority of those customers would mean many thousands of dollars in lost time: time spent emailing back and forth with customers, researching new bugs and issues and ultimately building and deploying fixes.

And even with all of the preparation and testing that we now do before pushing updates, customers still run into issues.

With more customers pushing our product to its furthest reaches, bugs and incompatibilities are being found all the time.

And more bugs means less time for our team to work on everything else. 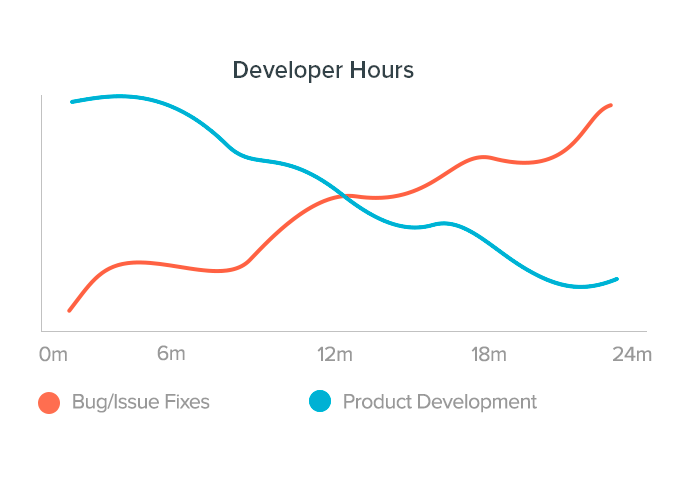 Takeaway: You’re not going to be able to move as quickly or as aggressively as you’d planned. But that’s okay; don’t let growth come at the cost of your existing customers’ experience.

Early on, our costs were, for the most part, fixed.

Our infrastructure could easily handle the first few hundred customers without much issue, and the products and services we used all gave us plenty of wiggle room for early growth without any cost increase.

But now, as the number of customers we’re supporting rises, so do our costs.

Every expense gets bigger:

In a perfect world, every incremental dollar of revenue would go toward hiring new talent to continue helping us grow faster and smoother.

But as we grow, it gets more and more expensive just to keep the lights on. 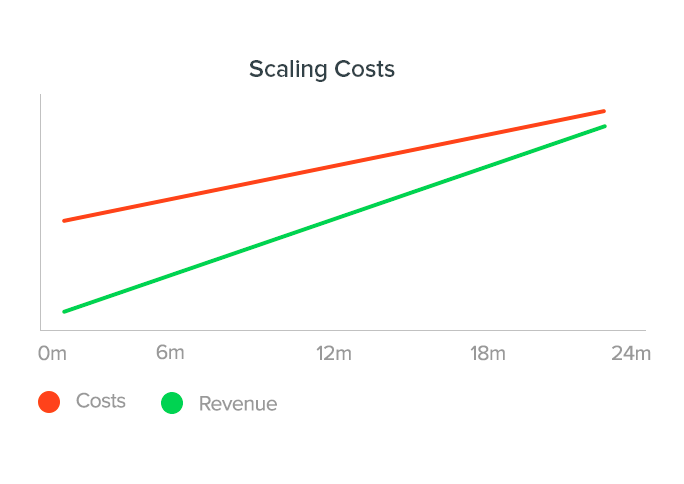 Don’t get me wrong; we’re making more money too, and our projections are strong, but we’re not profitable yet, and watching each new expense eat away at our runway can be a scary thing.

That’s why we’re so focused on things like pricing and conversion optimization; these aren’t mental marketing exercises that we do so we can blog about them. They’re going to mean the difference between life and death.

Takeaway: The bigger your business gets, the more expensive everything will be. Be careful not to let your costs scale faster than your revenue.

As we grow, the amazing feedback that we get from our customers goes farther and farther.

We see it all over Twitter, mainstream news sites and blogs we’ve never heard of.

The network effect of having lots of happy customers is incredibly valuable, as it helps us reach more and more new customers.

But that reach isn’t all roses.

When we had a major outage that crippled us for an entire day, people knew it.

It wasn’t just an issue for our handful of customers anymore; it created hundreds and hundreds of rightfully frustrated customers, and was seen by hundreds of thousands of people on Twitter. 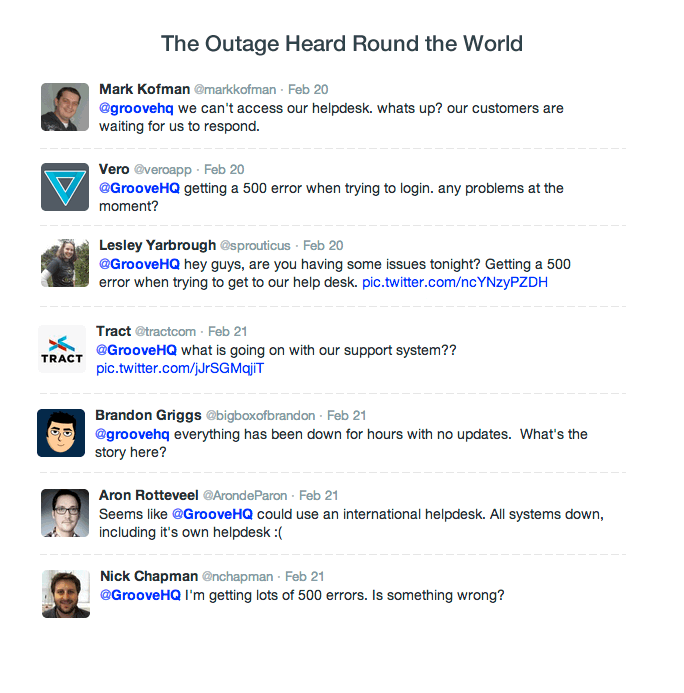 That’s a lot more damage to our brand, and a lot more trust that we had to win back.

How We’re Working Through The

Limited focus, limited time, limited money and huge distractions are all obstacles that stand in the way of a growing startup and its goals.

So how do we overcome those challenges?

Well, truth be told, we’re still working through them.

We have a lot to learn, and a long way to go.

But we’ve had more than a few wins — and a lot of valuable advice — that have led us to put our scaling eggs into two important baskets:

It’s not enough anymore to fix things as we go along.

While it ties up cash and keeps us from tackling our product roadmap as aggressively as I’d like to, we’re making long-term investments into ensuring that we’ll have the resources and stability we need to be a strong business in the long run.

We’re hiring new people and investing in them to keep our team happy and productive.

We’ve spent time rebuilding our IT infrastructure from the ground up so that our product can be more stable and reliable for our customers.

We’re thinking hard about future situations that we may not be expecting (like outages) and making sure that we’re prepared for them.

These investments won’t help us double our conversion rate overnight or even get a single new customer in the short term, but they’re absolutely critical for ensuring (or at least maximizing the chances) that Groove is around for a long time to come.

Takeaway: Don’t be short-sighted. If you can, invest in the things that will allow you to focus on growth without worrying about disaster. If you can’t make that investment, then you’re not ready to scale.

There are a lot of things about our business that we’ll never fully automate.

Development, marketing, customer support; these all require people to be deeply involved.

But within those departments, there are systems we can build (and have built) to automate various processes that make our entire operation scale more smoothly.

Unsurprisingly, we rely heavily on Groove for customer support. And as we’ve grown, we begin to use it in different ways than we had in the past. These days, we’re a lot more reliant on the automation features to scale our support without hiring new people.

On the development side, we lean on a number of apps to reduce the amount of work our team has to do by hand.

For marketing, we’ve purchased apps and built systems to streamline our email campaigns, our landing page development and even the development of this blog.

We’ll never automate something that could be done better by a human, but scaling our business has forced us to look very carefully at ways to take repetitive tasks out of the hands of our team.

These systems have played a huge role in freeing us up to focus on the more important challenges we face.

Takeaway: Some things simply don’t automate. For everything else, build systems; they’re a lot easier to scale quickly than humans.

There’s no question about it: scaling is really hard.

Sure, we’re not moving as rapidly as I’d dreamed.

But by focusing on building systems, future-proofing our business and continuing to make sure that every single customer has an amazing experience, we’re slowly but surely getting closer and closer to our goal.

Sooner or later, we’re going to get there.

And believe me; if we can, then you can, too.

The most important thing to remember is this: don’t do what I did. Don’t assume that once you get over the “hump” of Product/Market Fit, the hard work is done.

The first stage may have been tough, but it’s only now that the true grind begins.