A few months after launch, we were acquiring, activating and retaining users. Still, there was one piece missing…

This is part five in our ongoing series, Journey to $100K a Month. Earlier posts can be found here.

As most of the Groove team sat around my kitchen table, we were brainstorming about how were were going to solve the ultimate “business” challenge:

How are we going to make money?

Of course, the first — and most important — answer to that question is to have something that people are willing to pay for.

But after months of tweaking, stripping down, building up and optimizing, we had that. People were getting real business value out of using Groove.

Still, all we had been asking for in return is user feedback. That was a fair trade when we were trying to put together a product that actually works, but now, in order to keep the business alive, we had to start getting paid.

Disclaimer: the pricing models discussed in this post, no matter how disruptive we tried to be, aren’t revolutionary. They’re the same basic models that you’d find in many SaaS businesses. But the lesson, for me at least, was the importance of testing everything, no matter how basic or simple it seems. Read on to see what I mean…

We began kicking around ideas:

“What if we just use the same model as Zendesk or Desk.com, but cheaper?”

“How about we have a low base price and charge for extras?”

“We could do a flat rate per company, instead of billing per agent.”

These weren’t “disruptive” enough. We got into this game to change the way people think about support, and that starts with pricing. We have to blow people’s minds with a customer-friendly pricing model that was unlike anything out there.

So that’s what we set out to create.

After a few days, we had what we thought was the winning formula:

Unmatched flexibility in a freemium offering that had per-agent pricing, but also let companies have “part-time agents”.

Doesn’t get much more flexible than that, right? 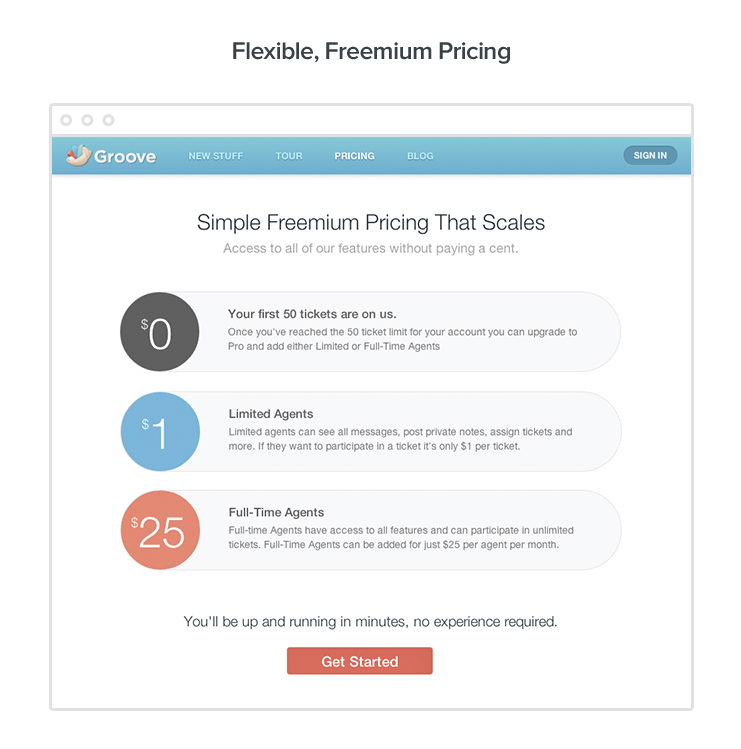 To us, the page looked like a breath of fresh air when compared to the competition.

But to our customers and prospects? 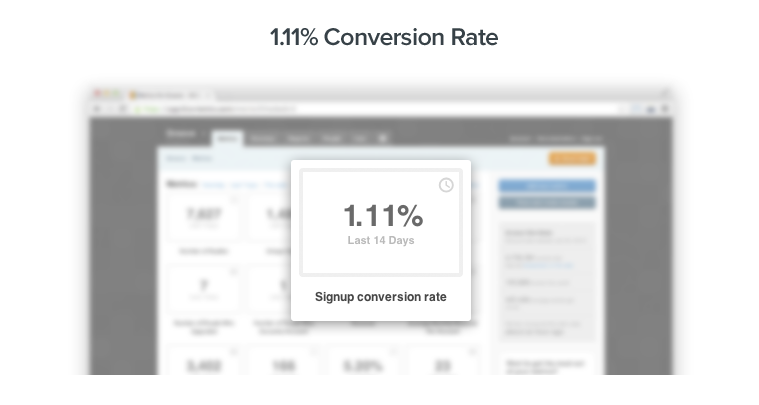 Boy, did that fail.

As we talked to more and more site visitors, something we should’ve known all along became very clear: our pricing model was ridiculous. It was overwhelming, and made the decision to buy from Groove a complex one.

Our “unmatched flexibility” was costing us customers. We had to change direction.

Takeaway: Never complicate what you can simplify. Especially if your competitors are simplifying. Making your customers work to understand your pricing is never the right approach.

Asking our customers had worked well for us in the past, so we decided to try it again.

We asked 30 customers — both from the ‘most-engaged’ pool as well as the ‘least-engaged’ one — what sort of pricing might be the best fit for them. 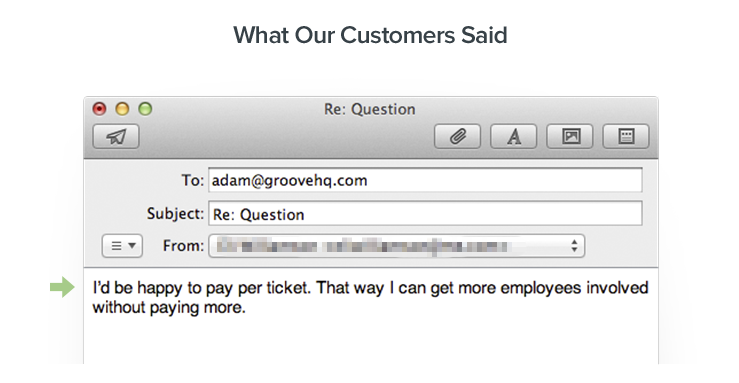 Great! It only took a couple of days to put this new, improved pricing scheme together: 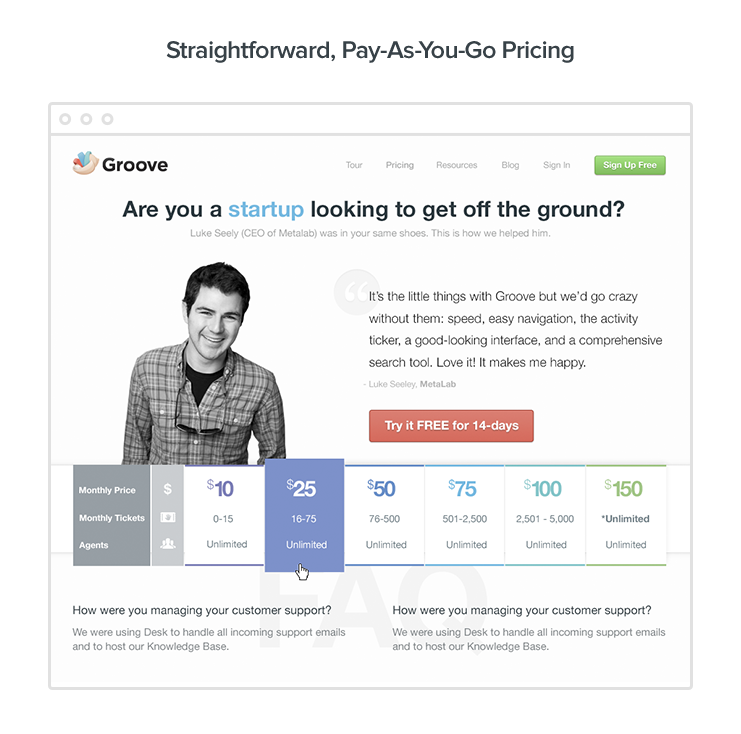 While I’d love to say that this research-backed change went on to make us a ton of money, this one flopped, too. 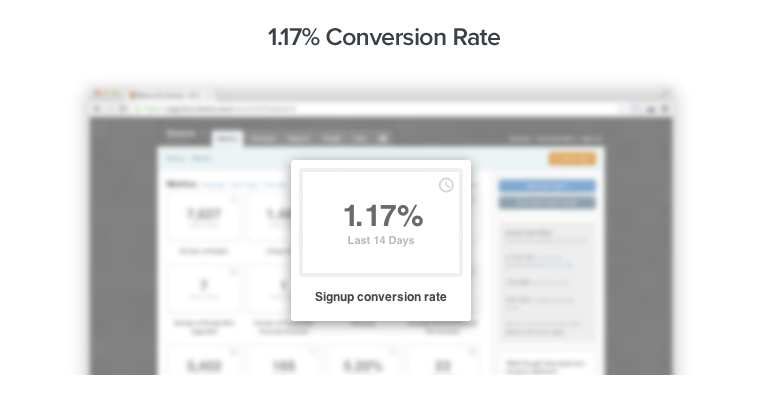 Even though people told us that this approach would make them happy, when we dug deep and asked site visitors for honest feedback, we found that they ended up being scared about the uncertainty of never knowing what they’d be paying in a given month.

Takeaway: Your customers are your lifeblood. Love them, support them, and help them succeed. But you don’t always have to listen to them. For many issues (like pricing), what they say they want and what they’ll actually act on are entirely different.

This was getting really frustrating. We were putting a ton of work into pricing, and seeing nothing but negative results.

Our “aha moment” came one afternoon when we weren’t even working on pricing. The team was huddled around the Groove web app, and we were busy simplifying. As we stripped off feature after feature, moving ancillary functions into the Groove App Store to streamline the user experience, it hit me:

If our uniqueness comes from being the simplest, easiest app, then our pricing has to reflect that, too.

Well, it wasn’t that eloquent in my head at the time, but the point was clear: we needed to simplify pricing.

So just as we did with our product, we stripped down pricing to its most basic, simple form.

One single price. Everything included. No extra charges. 14 days free. 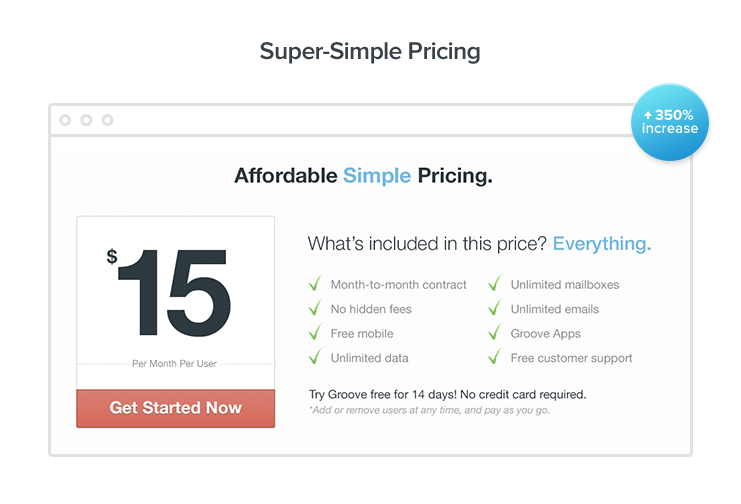 We had a winner. Almost immediately, we began to see conversions rise — more than 350% over the previous model! 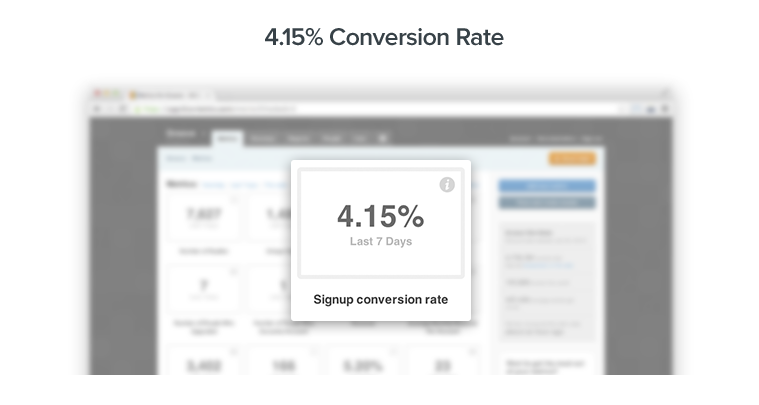 And even more importantly, this simple change (no pun intended) led to a 25% increase in overall revenue. We had finally solved one of the most pressing challenges in our business: we were making money, and we were doing it effectively.

Takeaway: No pricing model is right for everyone. For us, a simple, flat price finally worked. For you, that might be increasingly robust tiers of a business app, or pay-as-you-go. Think about what your customers expect from your product, and make your pricing reflect that.

Shortly after we introduced the winning pricing model, we added something that boosted conversions even further: a tool that made the decision to use Groove even easier.

We put together a chart that compared what a user would pay for Groove, versus what they would pay using our competitors’ apps: 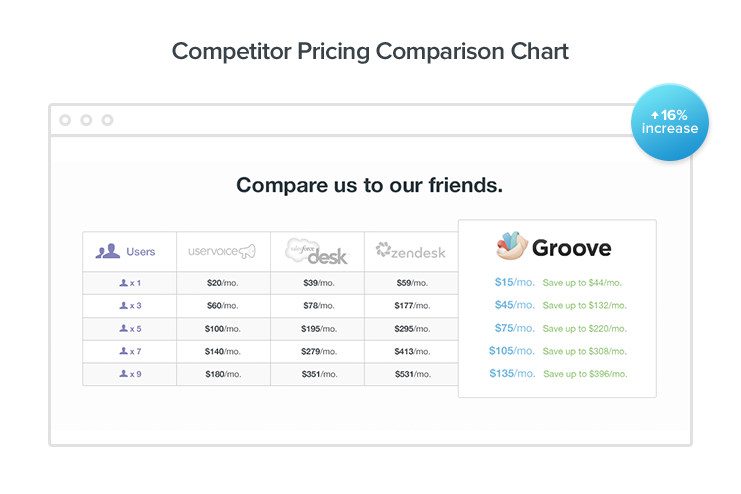 Notice how this isn’t a “feature matrix” that only has a few features checked in our competitors’ columns, and a column full of checks for Groove. These are bullshit, and everyone knows it.

The chart above takes an objective look at a single differentiating factor: cost. And it makes the decision for those for whom cost is a deciding factor very, very easy.

Takeaway: No pricing model is right for everyone. For us, a simple, flat price finally worked. Note that “simple” doesn’t have to mean “cheaper.” Think about what your customers expect from your product, and make your pricing reflect that.

In next week’s post, we’ll cover how we launched our new blog and get 88 comments, 1,000 subscribers and thousands of shares within 24 hours.

What haven’t we done?

With our focus on product development while we made the long, slow trudge toward product/market fit, we haven’t done much more for growth than what you see above.

That all changes now.

Nearly all of our focus from this point forward will be on testing, tuning and applying new strategies and techniques to go from where we are ($30K in monthly revenue) to where we’ve set our sights ($100K) and beyond.