Nobody makes the right decisions every time. Here are the ones I’d like to redo.

“Live life without it,” say thousands of motivational speakers and bumper stickers.

Well, there’s certainly value in not dwelling on the past, I think there’s a hell of a lot to be learned by studying it.

And personally, when that study makes me realize what a terrible mistake I made, I can’t help but wish it never happened.

So, I have regrets. Some big, some small. But they all influence the decisions I make and the advice I give today, so they’re actually quite valuable.

Today, I’ll share a topic that gets asked about often on the blog: “What would you have done differently?”

A lot of people ask what I would have done differently. Here are the 5 biggest missed wins that I wish we had gotten right the first time:

When we started building Groove, we spent $50,000 creating the wrong product.

We built based on our own wishlist of features, based on what we thought people would want. 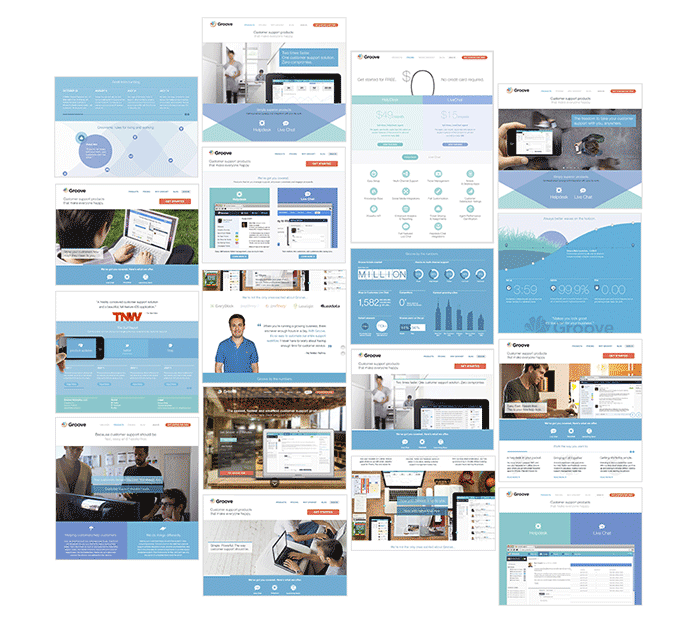 And when we finally launched, we had two full-blown products, and only a small team to support them both. 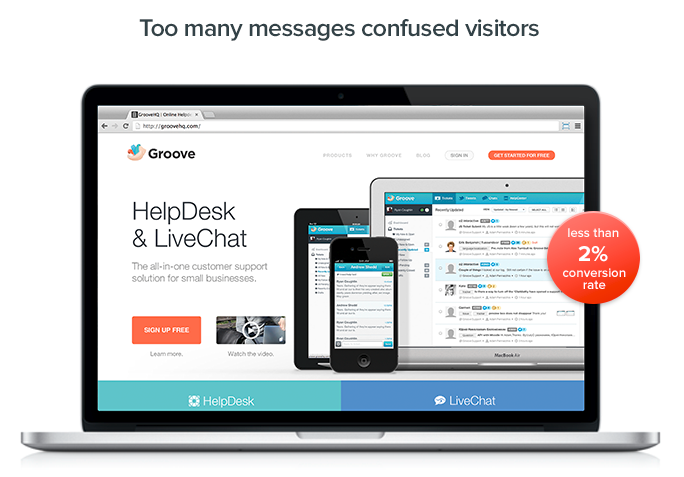 Site visitors were confused by the dual messaging, our team was spread thin having to support multiple products, and our customers were frustrated that neither of them worked particularly well.

It took us six months to recover from that (and we eventually killed off one of the products entirely).

The way we recovered was by spending hundreds of hours talking with our market and learning what they actually wanted, and then testing those insights in small ways, rather than betting big on hunches.

That entire fiasco could’ve been avoided if we had focused on intensive customer development from the very beginning, before we even wrote a single line of code.

2) Focus on Our Technical Infrastructure

When I started Groove, I hired an agency to help us build the first iteration of the app.

In a lot of ways, this was a great decision, and arguably the best one I could’ve made given the circumstances.

But it also presented us with some challenges as we transitioned to an in-house team.

There isn’t a single developer on our team who was there for our first line of code.

Instead of focusing on building our prototype from the ground up with an eye toward maintaining it for the long-term, our development team was forced to scramble learning a new codebase while also having to support an influx of new customers and build new features for them.

We never really had a smooth onboarding period, and it hurt us as we took on a lot of technical debt that it’s taken us a long time to recover from.

Not only did it sometimes take longer to find bugs and fix problems, but it was a morale issue, too.

I would have loved for our team to feel the “ownership” of the product that comes with having built it from day one.

If I had gone with the agency again, I would’ve planned a lot more carefully for the transition to ensure that our team had the time to learn and adjust before bringing customers into the flow.

3) Establish Core Values on Day One

At our coaching retreat last year, one of the things we focused heavily on was core values.

Not some cliché, tired list of attributes (“Integrity”, “Respect”, etc…) that you tack on the wall and wish that your company had.

The process of creating those values is something we’re undertaking right now, and it’s already been a valuable exercise, even in its’ early stages.

Shining a light on why we do what we do makes decision-making easier across the entire organization.

With strongly held core values, every difficult choice can be held up to those values, and the “right” answer becomes much clearer.

There’s no reason a founder can’t do this from day one, and establishing a set of values by which they want the company to be run will also have a big impact on those critical early hires and business decisions.

It’s an asset that I’m thrilled to have in place soon, and one I wish we had four years ago.

Content marketing is, without a close second, the biggest driver of traffic, leads and new customers to our business.

It helps us build an engaged audience of people who know and trust our brand.

It helps us establish credibility with industry leaders and anyone discovering us for the first time.

It helps us start partnerships with amazing companies like Slack and MailChimp.

And it helps us deliver value to many, many more businesses than we can ever help with just our product.

It’s been a lot of work, and a lot of reward. My only regret is that it wasn’t until about a year after we had a product that we began to think about doing content marketing right.

If I was starting over again, there’s no doubt in my mind that the right move would be to begin building an audience well before we even had a product, like the Unbounce team did.

The question we had from the beginning was “how are we going to find customers?” It’s not like people are searching “landing page solution” or “landing page builder.” People didn’t even know to look for us, so how will we go out and find them? So that was a really important challenge for us to tackle, and we made the decision to start blogging on day one. [Ed. note: actually, it was more like day -165, as the product was six months from launch]

We needed to make connections with thought leaders, and to become thought leaders ourselves. So we worked hard, blogging, guest posting and promoting, and by the time we launched, we already had a reputation in the space. The thought leaders we had built relationships with talked about our product and got people interested. I don’t think there would’ve been any other way to succeed.

One of the biggest mistakes that startups make with marketing is planning a big “launch push” without any work beforehand or any strategy for sustained growth afterwards.

The benefit from having your launch covered in TechCrunch is fleeting, and for most, minimal.

The benefit from investing in building real relationships with an audience that could one day become your customers will pay off forever.

As we dealt with the challenges that came our way at every stage of growth, and as we tried to figure out how to overcome them, one thing became clear: these challenges might be new to us, but they’re not unique.

Every business challenge you’re facing has been tackled by many, many people who came out successful on the other side.

The value I’ve found over the last couple of years from working with brilliant and experienced advisors and mentors has been tremendous, and it could’ve helped me avoid a lot of these regrets in the early days.

These relationships can be game-changing, and it’s not that much work to make them happen; you just have to do the right things:

Starting this process at the outset can help you avoid a lot of headaches and heartbreak along the way.

However, I hope that by sharing my retrospective thoughts with you, I’ve given you some ideas for mistakes to look out for that you might be making, or strategies to be thinking about as you grow.

It’s impossible to do everything right, always. But by examining our decisions after the fact—even if we don’t dwell on them—we can learn a lot about how to make better decisions in the future.