Rick Perreault, the CEO and Co-Founder of Unbounce, isn’t the typical SaaS entrepreneur you might read about on TechCrunch.

He hasn’t been building businesses since he was in high school.

And he’s not from anywhere near Silicon Valley.

But in many ways, his background is exactly what prepared him to build his company into a runaway success.

Where the conventional tech-bubble wisdom might suggest raising a ton of money, or moving to a startup epicenter, or devising a marketing plan around Facebook ads, Unbounce — a SaaS company that makes it easy for marketers to build and test landing pages without any coding — did none of those things.

The company has a track record of, as Rick puts it, “zigging when others zag.”

It seems to be working, as Unbounce zigged its way to nearly $7 million dollars in revenue in 2014.

We asked Rick about why Unbounce has been so successful, what they did in the early days to grow, what challenges they’ve faced, what they would’ve done differently, and more. The insights Rick shared are, to us, transparent, enlightening and incredibly useful.

And if you’re interested in growing your business in 2015, I think you’ll agree. 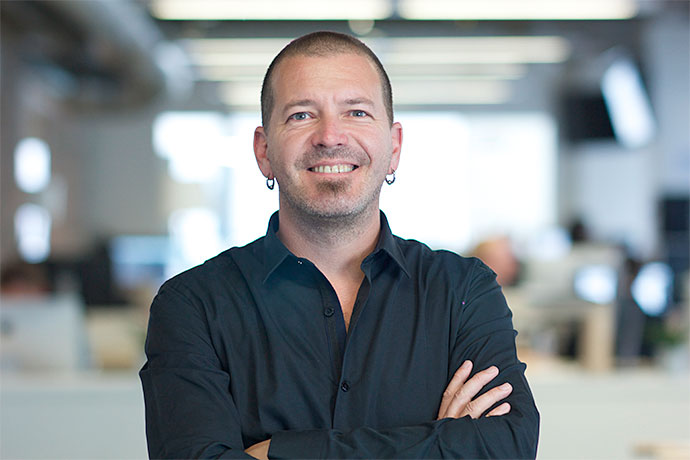 Rick’s first career was as a designer. “I’d been doing web design for a lot of companies, and I had the opportunity to work closely with our clients’ marketers.” That exposure is precisely what led to Rick’s aha moment about Unbounce.

I saw time and time again that, while we were running these marketing campaigns, our clients couldn’t get landing pages made. They’d have to go through their IT department for anything related to their website. It was really frustrating and slowed people down.

A real-world burning pain that was making life difficult for marketers (and for Rick)?

A passion for marketing and design?

A frustrating lack of options to solve the problem?

With all the makings of a huge business opportunity in place, Rick decided to take the plunge. He convinced his five co-founders to join him in building a better way for marketers to create landing pages, and Unbounce was born.

Rick summarized Unbounce’s early struggles with a simple fact that intimidates, excites and overwhelms many entrepreneurs: “None of us had ever done this before.”

Incorporating a company, prioritizing tasks, understanding who to hire…the list was daunting, but there was one thing that Rick believes his team did in those early days that led the company to blossom:

The one thing we did really well was, long before we started coding, we did a lot of interviews of prospective customers and other marketers, to really validate the pain. That allowed us to focus on building something that people were actually going to pay for.

Sound familiar? Anyone who reads this blog knows how much we love customer development at Groove, and the way Unbounce did it was both resourceful and brilliant:

I had the pain, and I needed a solution, but I wanted to see if other people had the pain. At first I went out to my network, and that was encouraging, because others in my network had the same pain. But then I thought, ‘my friends and family think it’s a good idea, let’s go out to the world and see if this pain is universal.

I used Facebook ads and sent people to a survey I created on Survey Monkey. I remember that you could target people by profession, so I had 42 marketers fill out my survey and leave me their email address where I could contact them. They all expressed the same pain. The more people we interviewed, the more the vision and the solution came together.

Those early days of customer development helped refine Unbounce’s vision, and even exposed the team to some flawed assumptions they had made:

I actually had assumed that the real pain was just getting the landing pages made, and that once that was done, marketers could then just plug in Google Analytics and use Google website optimizer for testing. That’s what a lot of marketers were using, but it turns out that that was a huge pain as well because it required somebody with coding skills to tag all the pages. This was long before Optimizely made it super easy, so that was a problem.

We assumed marketers would use the tools that were out there, but they found those tools too hard, so we actually had to build it into Unbounce if it was going to be something worth buying.

As Rick asked, “can you even imagine Unbounce without A/B testing?” As it turns out, that core feature only exists because of the customer development the team did early on.

Another big challenge early on was focus.

It’s especially tough when you’re bootstrapping, and you’re Ramen profitable, and you start getting recognized brands calling you up saying hey, if you just build this feature, we’ll buy. It’s so tempting, but it’s also a huge distraction. We fumbled around for two years trying to do everything for everyone, and it took a lot of discipline to get focused. In order to have a business that’s actually a good operating business we needed to pick a tightly defined customer segment, focus, go after it and win.

Few companies have more than a couple of co-founders. Four is a lot. Five begins to seem messy.

But, according to Rick, without all six of them, the business wouldn’t have been successful. He offers this advice to founding teams:

Bring people in for their skill set, and keep them focused on that. In the early days, we’d trip over each other a bit, but once we all focused on what our strengths were, things got smooth. You and I wouldn’t be having this conversation if it wasn’t for 6 co-founders. It took 6 people who were willing to make this leap.

It’s not like any of us had a lot of capital, and we didn’t have an investment. It took the 6 of us to bootstrap and just really build this thing.

“Build this thing” they did, and they did it pretty quickly. Within 16 months, the company had $50,000 in monthly recurring revenue. Nine months after that, they hit the $100,000 mark.

How’d they do it?

The answer to this question is, arguably, the most important takeaway in this entire interview.

Many businesses take on an “if we build it they will come” approach. Build something awesome, and people will flock to it.

All of those businesses later find out that that’s not the case at all, and they end up playing catch-up, scrambling for customers after they launch.

Unbounce is one of the companies that pioneered content marketing on the web, and they started doing it six months before they even had a product to sell.

The question we had from the beginning was ‘how are we going to find customers?’ It’s not like people are searching “landing page solution” or “landing page builder.” People didn’t even know to look for us, so how will we go out and find them? So that was a really important challenge for us to tackle, and we made the decision to start blogging on day one. [Ed. note: actually, it was more like day -165, as the product was six months from launch]

We needed to make connections with thought leaders, and to become thought leaders ourselves. So we worked hard, blogging, guest posting and promoting, and by the time we launched, we already had a reputation in the space. The thought leaders we had built relationships with talked about our product and got people interested. I don’t think there would’ve been any other way to succeed.

At the time, content marketing wasn’t as hot as it is today, and the team got some pushback.

A lot of people close to us didn’t quite believe or really understand it. They’d say: ‘you gotta pay, go out there and do paid acquisition channels’. We just stayed focus on content marketing to really build our reputation in the space.

Rick credits Oli Gardner, a marketer and Unbounce co-founder, with the company’s early focus on marketing. “If Oli hadn’t been one of the co-founders and we had another engineer, we probably would’ve spent way more time on product and less time on marketing. But the blog did so much for us as a company, and it still does; it’s the foundation of all of our marketing today.”

Making a Scary Decision (And Reaping the Rewards)

When asked about what Unbounce would do differently if starting over today, Rick doesn’t hesitate. 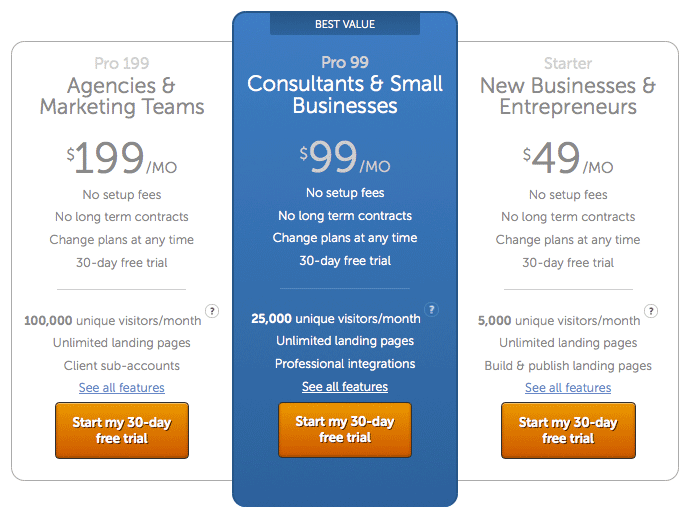 But at the last minute, Rick says, they “chickened out.”

We thought, ‘no one’s going to pay for this. Let’s just have a $10 plan and $25 plan.’ In hindsight, that really, really hurt us. It derailed us from our focus.

For our $25/month plan, it cost us, on average, $150 to acquire a new customer. Yet the average customer on that plan would stay with us for 4 months. They churn high because they were just experimenting with Unbounce.

The team had a tough decision to make: could they raise their prices and still get new customers? After internal debate, they decided to grandfather in existing customers at their current prices, and raise prices for new customers.

Right away, “the business started to work much, much better.”

We finally started attracting marketers that actually had a budget. Our support costs went down because our new customers didn’t need as much help, and the feedback we got was so much better.

When our pricing actually began to line up with the customer profile we wanted, we’d get feedback that would help us build a better product that people would actually pay for, since it was coming from the people actually paying for Unbounce. With the old $10 plan, we’d get people screaming for features that wouldn’t even up even paying for the product.

And they’ve built a business that’s a marquis case study in the power of content marketing. When done right, a laser focus on content (and plenty of customer development) can take your company from $0 to $100,000 in monthly revenue, and far, far beyond.

Groove’s blog subscribers tend to be voracious readers who work tirelessly to better themselves and their businesses. That’s why we’re asking each of our My First $100K interviewees to share their favorite blogs that they read daily.

Your Turn: Ask Rick Anything

Rick has (very) generously agreed to answer your questions in the comments of this interview. We’re going to be watching closely and trying to learn as much as we can ourselves, so don’t be shy.

Post your questions for Rick in the comments below.

How Harvest Grew to 40,000+ Customers With Zero Funding