People love to talk about how great failure is. Here’s a different perspective.

One of the things that I’m lucky to do because of this blog is hear from a lot of readers.

They ask me for advice, bounce their ideas off of me and walk me through their business plans.

And I love those conversations. I get a lot out of them.

But one of the things that frustrates me is when I talk to people who ache to pursue their startup idea, but won’t. They focus on the reasons why things won’t work out.

The biggest reason people cite for not making the jump?

And people say that they’re afraid of failure.

I have an alternative theory, and I think it might help people better understand themselves, and better prepare themselves to finally follow their dreams.

What Most Of Us Really Fear

I don’t think it’s truly failure that we fear.

The discomfort of telling people that you failed.

Of knowing it yourself.

Of hearing the word “no.”

Of coming to terms with the fact that things didn’t turn out the way you wanted them to.

The Problem With Embracing Failure

I’m not on board with the people who glorify failure. I think that startup culture has a bit of a weird failure obsession, and it breeds the notion that failure is a good thing.

That if you’re not failing all the time, then you’re not doing it right.

And I get the sentiment, I really do.

I accept that failure happens, and it’s a big part of being an entrepreneur. It’s one of the reasons we’re so transparent with our failures on this blog. I think it’s valuable for people to see that it’s simply a fact of growth and trying new things.

But I also think that the trend of “embracing failure” is dangerous for a lot of first-time founders, because it causes people to think that failure is SO “okay” that we don’t need to take steps to prevent it; to do the hard work of mitigating our risk so that we minimize the chance of failure.

5 Ways To Get Comfortable With Discomfort

The key to getting comfortable with discomfort is doing it in ways where the stakes are low.

You don’t want your first experience with discomfort—in the business world, anyway—to be your company crashing and burning.

One of the approaches that I love is SumoMe founder Noah Kagan’s coffee challenge:

We have a thing called the Coffee Challenge.
You have to ask for 10% off at a coffee store. Any coffee store. Get a muffin, ask for 10% off.
Most people will make an excuse.
“Oh, I’ve already done sales for five years.”
“Oh, I’m not afraid of doing that.”
“Oh, I don’t need a discount, I have money.”
But if you go ahead and ask for 10% off coffee, I guarantee that you will learn something about yourself that will surprise you.

I’ve done it myself, and he’s right… it will test you, and it will teach you something about yourself.

But beyond Noah’s challenge, there are a lot of ways you can build your discomfort “muscle,” whether you’re debating taking the plunge or you’ve been running a successful business for years.

Below are some of the ways that, in my career as an entrepreneur, I’ve been exposed to discomfort in small ways that have helped me build a thicker skin and prepare myself better for the bigger discomfort that often comes with running a business:

1) Ask for feedback on your business idea.

When I was starting Groove, I’d pitch the idea to anyone who would listen.

The greatest progress—and the greatest discomfort—came from pitching people who actually knew what they were talking about.

Those folks fell into two camps:

I was told that the idea would never work, I had every flaw pointed out, and even every reason why I, personally, wouldn’t succeed.

But I also got some amazing feedback that I’ve leaned on to turn Groove into a growing business.

I made some great connections with people who are still customers and advisors today.

And most importantly, I developed a really thick skin.

2) Get someone to pay you money for something.

One of the hardest things to do for people who have never done sales is to ask someone else to buy something from you.

We don’t think we deserve it, and we’re afraid that it’s going to be uncomfortable.

The truth is, it is uncomfortable. At first, anyway.

To get comfortable with the discomfort of selling, all you have to do is sell.

And if you think you have nothing to sell, think again:

Just like Noah’s coffee experiment, the benefit here isn’t about the money. You can charge as little as you want, and you should charge a small amount. The idea is to get comfortable with the act of selling.

If you have a blog, this is a great way to promote it and practice discomfort at the same time.

All you have to do is ask a reader to leave a comment.

I don’t mean adding a call-to-action to leave a comment in your mass email.

I mean personally reaching out to a reader, thanking them for reading, and asking them to leave a comment on your blog.

This is similar to the previous experiment, but you don’t need a blog to pull it off.

Email anyone that can vouch for you and that has a Twitter account—a customer, a friend, a colleague—and ask them for some social media love.

My mother always told me that you don’t get what you don’t ask for, and we ALL want more people talking about us. You’ll be amazed at what people are willing to do for you if you simply ask.

5) Try to get a discount on a business app.

This one is also similar to Noah’s coffee experiment, but this time, it is (at least partially) about the money.

Business software can get expensive, fast. Apps can turn into real overhead that eats away at your margins if you let them.

Asking for a discount can turn into very real savings that you can reinvest in growing your business.

This is a real email that I used, in the early days of Groove, to get a 40% discount on a popular SaaS app: 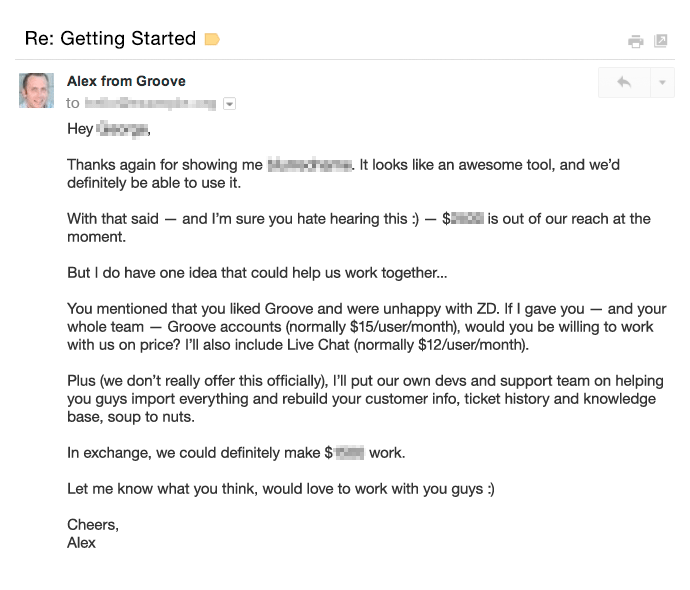 They might not give it to you (for example, we no longer give discounts), but you also might get lucky. And at least you’ll know you tried.

Being comfortable with discomfort, from what I’ve seen, is a common trait among entrepreneurs far more successful than I am.

But it’s not a quality that most of us are born with.

The good news is that it can be learned, refined and perfected, and it’s a skill that, once you get good at it, opens more doors than you can imagine, whether you want to start a business or grow the one that you already have.

I hope that you try one or more of these exercises and build your discomfort muscle; I promise it’s worth it.