I just crushed one of my worst fears. Here’s how you can too.

“I guess this is it,” I thought, as I wiped my sweaty palms on my jeans for what seemed like the hundredth time.

Any minute now, he’s going to skype in, and there won’t be any turning back.

But for now, escape scenarios continued to play through my mind.

What if I lie and say I got sick?

Or that my computer crashed?

Or that my power went out?

For three years now, I’d been avoiding this moment.

Gently turning him down with excuses of inconvenience: “now’s not a great time, we have our heads down on a big launch.”

Time and time again I ducked him, assuring him that one day soon, I’ll be able to make this thing work.

But every time, the voice in the back of my head whispered in terror: “no. fucking. way.”

Running through the last few years of dodging my fear wasn’t helping. And it made it all the more startling when I finally saw the Skype call coming in on my computer.

With one last deep, anxious breath, I clicked Accept.

Still nervous, I coyly responded with “thanks for having me, man. It’s been a journey here trying to get on this show.”

For the next hour, Mixergy’s Andrew Warner and I talked about the history of Groove, why I started the company, and how we went from nothing to nearly 5 million dollars in annual revenue.

In that entire history of Groove, this was the first recorded interview I’d ever done.

And in doing so, I finally walked through the fire of one of my worst, most debilitating fears.

I’m very comfortable on the phone and in person, selling one-on-one to customers, investors or potential team members. In fact, I love doing those things.

But for as long as I can remember, I’ve dreaded the idea of “public speaking.”

Of getting on stage and talking to a crowd, or even of getting in front of a single interviewer and being put on the spot, for hundreds or thousands (or in Mixergy’s case, many many thousands) of people to later see and judge.

It’s not exactly a rational fear for a “confident” person to have.

And for years, I’d been dodging Andrew’s emails to be featured on Mixergy. 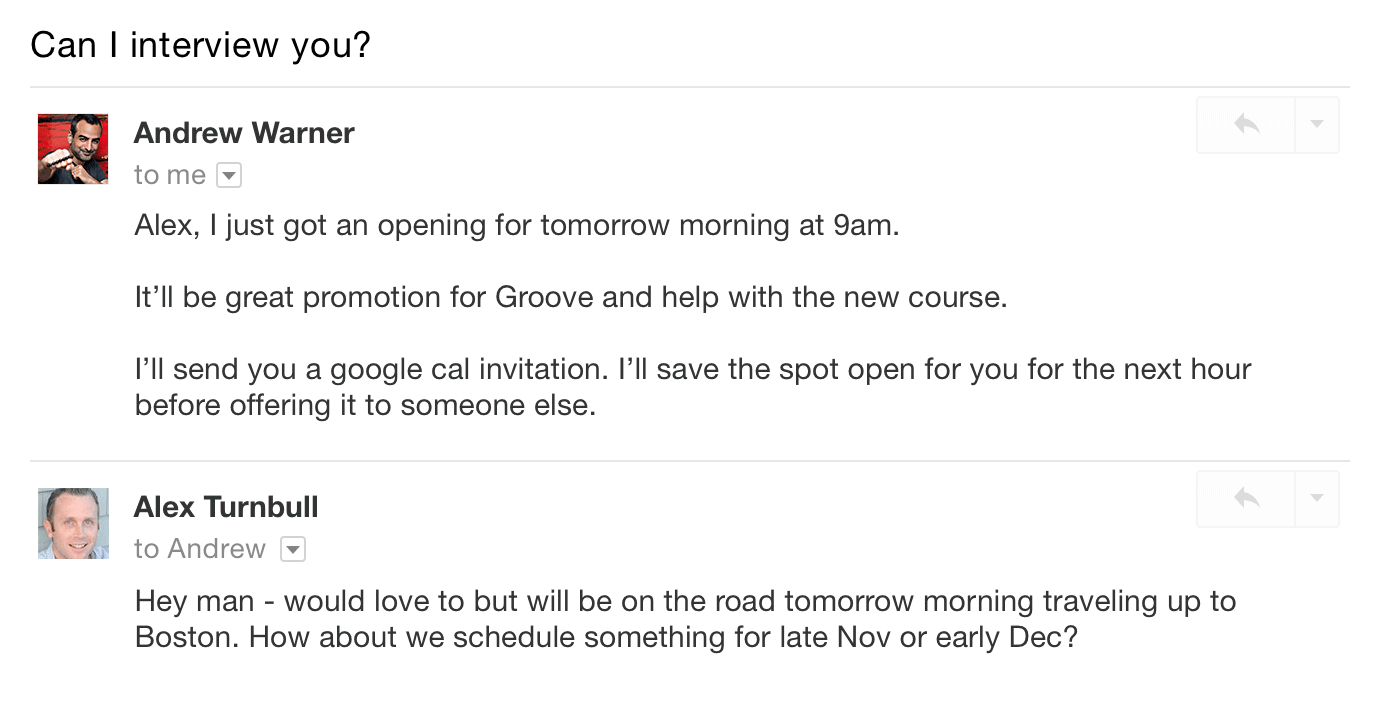 And when I finally agreed to do the interview, I continued to plot my escape.

Even after doing a pre-interview with Andrew’s producer the day before our scheduled call, I considered pulling out.

It is, of course, an irrational fear.

After all, what’s the worst thing that could realistically happen?

But in the privileged modern world we leave in, almost all of our fears are irrational.

And yet we all have them.

For me, that fear has been public speaking. For many others in business, it’s selling, hiring, firing, server outages, getting on a plane, or one of hundreds of other common fears.

I’m willing to bet that you, too, are being held back by something you fear.

It sucks. It really sucks.

But as I’ve learned in overcoming a lot of my other fears as a founder, the only certain cure for fear that has worked every single time I’ve tried it is to walk through the fire.

Walk Through the Fire

I finally did the Mixergy interview.

And five minutes in, the realization hit me: this isn’t so bad.

I had literally spent years terrified of this very moment, thinking through all of the different ways it could go horribly, irreversibly wrong.

And yet, in just five minutes of bracing myself and walking through the fire, that panic dissolved.

When Andrew sent me the interview recording, I immediately watched it from start to finish.

That was excruciating. Watching yourself speak is a deeply embarrassing experience.

Still, as I watched myself, clearly nervous and stumbling often, but ultimately delivering answers that I was proud of and that could help Andrew’s audience grow their businesses from our journey, I was proud.

I started to get emails from friends⁠—and from people I’ve never met before⁠—about the interview.

The video, audio and transcript of the interview can be found here, or you can watch it below.

I know that I still have a lot to improve on.

But I’m thrilled that I did it, and I’m excited to have sufficiently overcome my fear of speaking that I’m eager to do it again and get better.

My Goal for 2017, and How You Can Crush Your Fear This Year Too

Crushing my fear by walking through the fire was liberating. It made me realize⁠—not just on a rational level, but on a very deep emotional one⁠—that there’s nothing to fear.

And internalizing that mindset opens me up to a world of possibilities.

Doing more interviews like this can help make our product and our company more human, as Andrew told me: “It’s funny that you have a fear of speaking. And really, it’s cool, because it makes you more human. People think of you as superman on the blog, and it’s nice to see you’re human like the rest of us.”

Showing off more of that human side can only help us.

And now that the fear is gone, I can focus on getting better at speaking; something that I have no doubt can help me⁠—and my company⁠—grow.

Andrew even gave me some generous feedback and advice at the end of our interview for continuing to improve:

They’re going to give you so much room to screw up, and because no one is going to see it, it won’t matter.

Then you build up your confidence and your experience. You’ve done them a favor.

Some of them end up being really big anyway and then they feel like they owe you and you’ve gotten a lot out of that.

Then you start to rock and roll and know how to tell your story well.

And later, when I followed up via email, he gave me even more terrific advice:

So one of my key goals for 2017 is to do what Andrew said: get as much practice in interviewing and speaking as I reasonably can, to make myself a better speaker, and to be the kind of founder that makes my team and my customers proud when I take the stage.

It’s easy to avoid something just because you’re scared of it. I did that for a long time. But it won’t help you.

That’s why I’d love to see you take on this important goal for 2017: pick one of the fears that’s been holding you back⁠—whether in business or in life⁠—and destroy it.

Set a commitment that you’ll feel bad backing out of.

Walk right up to the edge of your fear.

Close your eyes, put one foot forward, and walk through the fire.

You’ll realize very, very quickly that it’s not so bad.

And just like that, you’ll open up a world of opportunity.

Let me know in the comments: what fear are you going to tackle in 2017?