For many months, we’ve been getting requests to build a Groove API. Here’s why we finally did it…

Just this week, we got a Tweet from someone who was considering trying Groove:

@Groove Any idea when we can expect a REST api? It’s the only barrier we have and we REALLY wanna use your service

This sort of thing isn’t unusual; I’ve been getting Tweets, emails and chats pretty consistently for the past year, all requesting, demanding or begging for Groove to release an API.

For a number of reasons, it’s taken us some time to do that. More on that below.

But even though our reasons were good, I’ve been painfully grappling with an API as a “wishlist” item for a long time. Each day that went by, I couldn’t help but think of everything we were leaving on the table by not letting companies — hundreds of whom had already expressed interest — build Groove integrations.

It’s been tearing at me, but I’ve been patient.

But this week, that all changed with the launch of the Groove API.

Why We Waited Two Years to Build an API

The benefits of an API are obvious.

We know — from having done them before — that integration partnerships can help us grow by exponentially increasing our audience.

But up until now, our integration strategy was mostly a one-way street: we would build integrations for other apps, and then promote them with the help of our partners.

With an API, we could’ve executed on that strategy much faster and more aggressively.

So why wait two years to finally release an API?

I’ve written about the importance of focus before, but it was a major factor in the delay to get our API out.

Over the last year, we’ve been laser-focused on meeting a few very specific business goals, and to do that, we’ve relied on the high-ROI strategies and tactics that we already knew to work.

That means that, like every startup team that always has more to do than time and resources to do it, we’ve given up a lot of important things for “later.”

Hell, we didn’t even consider an SEO strategy until a few months ago.

So, like everything else that we would’ve loved to have, spending time on building an API would have to wait until we had the time (and team) to pull it off.

We had no shortage of technical challenges in our early days.

As I worked with an agency to build the first prototype, there were some challenges in building a team to work off of a legacy codebase; something many startup developers hate doing.

And as we hit the ground running, looking ahead at what we wanted to build — rather than preparing our existing infrastructure to scale with our ambitions — we got deep into technical debt.

Even months later, we were spending time playing catch up and paying off that debt, and it cost us dearly when our infrastructure wasn’t strong enough to avoid a major crash. At that point, we committed to focusing our entire development team on strengthening our technical core until it was something we would be proud and happy to work from.

A few months ago, we finally got to that point. But before then, there was no way we would’ve wanted to expose other companies to the same headaches we were going through.

Groove was our product, so it was our team’s job to deal with the issues and make it better.

Forcing other people’s development teams to do extra work and deal with a buggy app?

Frankly, that would be unacceptable.

Fortunately, this year we hit a turning point on both focus and product. Our infrastructure was solid, and our team was ready to tackle something that’s been on our wishlist for a long time: building an API.

Earlier this week, we opened our API to the world. 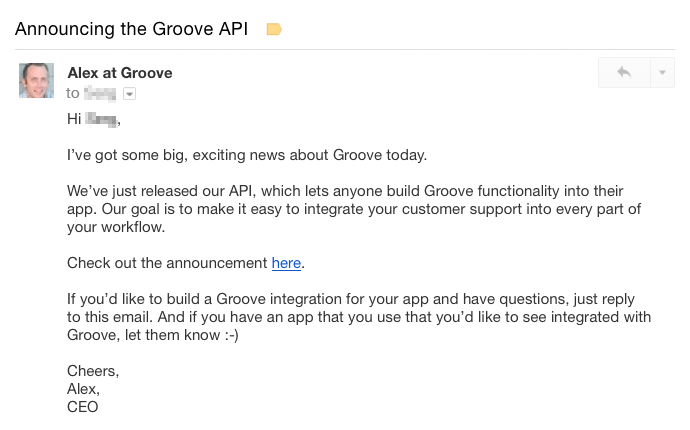 It lets other companies build Groove functionality into their products, including:

We already have nearly a dozen companies who have reached out about their plans to build using our API, and it’s only been 24 hours.

How We Plan to Make Our API a Success

If there’s one thing that I know for certain, it’s that “if you build it, they will come” does not apply here.

It doesn’t work with a blog, and it definitely won’t work with an API, where we’re asking companies to put already-scarce resources into building Groove integrations for their products.

After talking with a number of founders who have successfully used API’s to help drive growth, I can simplify the most important takeaways into two critical goals:

Here’s how we plan to accomplish each one:

1) Let as Many of the Right People Know About the API as Possible.

We’re stealing a page from the same book we used to make this blog successful, and building an engagement plan to reach out to companies who we think could get value from building a Groove integration.

Our criteria for putting together a list of prospective partners is:

For example, there are probably use cases where companies who the majority of our users have never heard of could build an integration that would be valuable for their users.

And there are probably situations where this would be the first integration that a company would build.

I welcome those partners, but our goal with outreach and promotion is to hit the most highly qualified leads possible to maximize the return on our time and effort, so we’re starting with lower-hanging fruit.

To manage the outreach, we’ll use a spreadsheet similar to the one we use for blog promotion. You can grab a copy of our API promotion spreadsheet here.

We’ll be executing on this in January when folks come back from their December breaks.

In addition to outreach, we’re working on adding our API to communities like Mashape and Small Business Web.

I will, of course, be writing about the success of our promotion later on, and I’m excited to get this effort underway.

2) Make It Very Attractive to Build a Groove Integration.

Some of the companies that we’ve built integrations with have been very supportive in helping us get the word out.

They’ve written blog posts, Tweeted and emailed their customers to let them know.

We really appreciated that level of support, and I knew that when we launched our own API, I’d like to provide that kind of help, too.

So to make it easy and attractive for potential partners to build Groove integrations, we plan on helping out with:

Because it’s so early, we haven’t yet figured out all of the ways that we’re going to support our integration partners. But we’re going to be testing different approaches and doing everything we can to ensure that we’re helping our partners as much as they’re helping us and our customers.

As you can see, many of our plans are in their very early stages. I’m not speaking from a position of great experience here.

But I hope that sharing our own experiences can help you think about the right time to build your own API.

And I hope that our approach to promotion inspires you to do more to get your API — even if it’s existed for a long time — out into the world.