You don’t have to look far to see the impact of ecommerce in 2022. You see delivery trucks everywhere. You see retailers shutting down, or minimizing their presence. Heck, you probably have a package waiting at your door right now.

But the question isn’t whether ecommerce is important. Anyone who sees the statistics—ecommerce is now over a $4 trillion (with a T) market—understands the impacts it has had on our lives. The question is where it’s going.

By 2022, the ecommerce industry is expected to gain another $600 billion or so in revenue. That’s a large enough increase to represent the creation of an entirely new industry by itself. And that means that anyone who thinks it’s “too late” to enter Ecommerce is either not paying attention, or simply can’t see the massive opportunities that exist.

Even so, you can’t get very far unless you know the lay of the land. And if you don’t know ecommerce quite yet, there’s never been a better time to learn. That’s why we’ll explore some basic definitions, benefits of using ecommerce, examples of platforms you can use, and look at some examples so you can see what’s going on in this industry—and how you can break in by next year.

What is ecommerce, sometimes known as e-commerce? You know the definition of commerce already: buying and selling. Adding the “e”—for electronic commerce—simply means you’re conducting commerce over the digital infrastructure the Internet has made possible.

But ecommerce isn’t limited to these transactions, either. Ecommerce can also include all sorts of business, including:

The Many Benefits of Ecommerce

In the world of major online retailers, the benefits of the ecommerce business model are obvious. It’s their bread and butter. But what about small businesses? Is it really easy to establish an ecommerce business in this day and age when you don’t have a team of developers ready and willing to help? 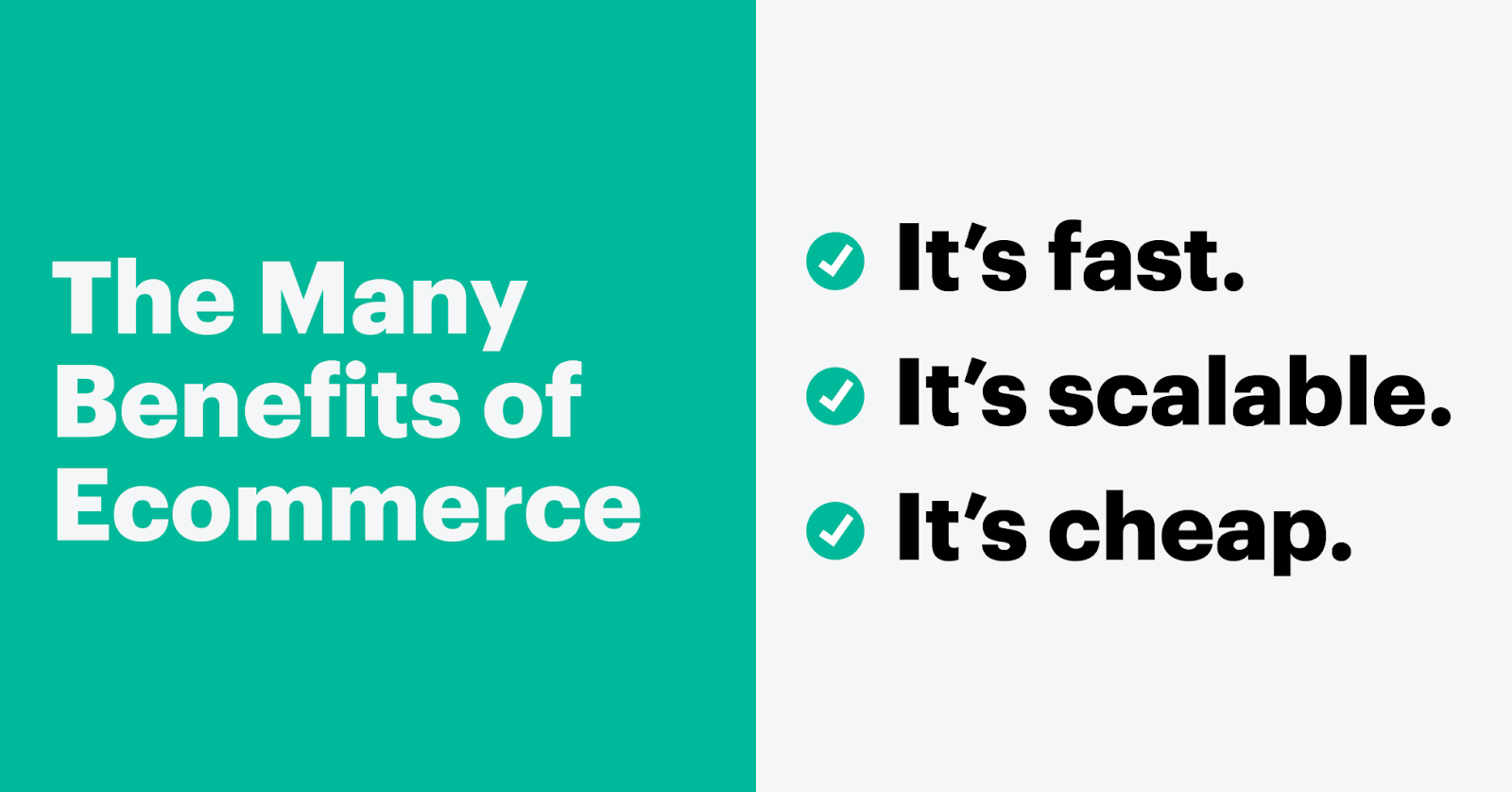 What are the Ecommerce Platforms Going to Be in 2022?

Unless there’s an unexpected sea change by next year, we already know the basic lay of the land when it comes to the platforms that make electronic commerce possible. Chances are, you’ve already heard of the most popular platforms that affect commerce these days—and they’re going to be around next year as well. Let’s tackle a brief summary of some of the most popular:

Ecommerce on the Big-Time Platforms

The examples above are all platforms that put the power of ecommerce in your own hands. If you’re a one-person operation, that’s great; you can use this kind of leverage to launch your own business. But given the fact that ecommerce represents multiple trillions of dollars every year, who are the big players worth learning about?

Amazon: A Story of Ecommerce to the Masses

Even if you’ve never dug deep into ecommerce before, you probably know all about Amazon. You may know it has the most popular shopping app in the U.S., with hundreds of millions of users signed up. You may know it offers its famous two-day shipping, which has revolutionized the expectations of ecommerce customers across the world.

Amazon’s success is in its ability to take big-time infrastructure and decentralize it. Not only is it a platform for people to find the products they want, but Amazon also connects with ecommerce suppliers to essentially function as a platform in addition to its own store. Today, ecommerce suppliers are constantly vying against each other for prime Amazon placement, cementing Amazon’s role as the world’s marketplace.

It seems like eBay has been around since the dawn of the Internet, and it hasn’t gone anywhere just yet. However, its traditional “auction” system is just one of the features that makes it an ecommerce powerhouse. Much of eBay these days has shifted to a more traditional retail focus that is more intuitive for many people.

eBay’s role as the “auction capital of the Internet”—our quote, not theirs—also puts the power of ecommerce in the hands of individual sellers. You can make money in an instant as long as you have something to sell, an eBay account, and a way to ship it. For many people, that has traditionally been their foot in the door to building a business online.

Some people have called Alibaba the “Amazon of China,” and its role in dropshipping has helped revolutionize ecommerce. What is dropshipping? It’s a strategy of ecommerce in which an individual or company promotes a product and sells it, but then outsources that sale to a third-party manufacturer who handles fulfillment.

As recently as 2019, there were hundreds of millions of people signed up to the Alibaba infrastructure. Given the growing importance of China’s role in the ecommerce scene and the prevalence of dropshipping, it may be one of the most important ecommerce companies you haven’t heard as much about, especially if you’re new to ecommerce.

Examples of Ecommerce Success (and Failure)

What can you do with ecommerce in 2022? To make sense of that, let’s look at some examples—and counterexamples—that will help you understand what people are doing these days.

A woman named Denise Woodard noticed something: there was a complete lack of allergy-friendly tasty snacks for her daughter. Sure, one food might have less of one ingredient, but then it would have another ingredient that was a common allergenic. Like all proactive entrepreneurs, Woodard decided she’d had enough. She was going to create a store all her own.

Woodard created Partake foods, a shop (based on Shopify) that creates foods and snacks without some of the most common allergenic ingredients. Avoiding artificial colors and preservatives, Partake Foods shows that an entrepreneur can be successful when looking for ways to solve a problem they had themselves.

It sounds like a successful business. The “Amazon” of pet foods. Who could argue with that? People want affordable products and quick shipping in places like Amazon, so it only made sense that Pets.com would be a success, particularly given how many people love to take good care of their pets.

The problem? Pets.com eventually became the go-to example of failures from the dot-com bubble. They hadn’t yet figured out how to ship large dog food bags, a real logistical problem, even as they were gathering capital and preparing for an IPO. Although money flooded the company, the basic problems were never addressed. The company became a clear example of what happened to many in the old days of ecommerce: investing too much in scale when you haven’t solved the red flags just yet.

How did ecommerce start?

Of course it required the Internet first, and that’s a story all its own. But ecommerce started up in earnest in 1994, when the first official Internet transaction with a credit card took place via encryption technology. This technology would help reshape the world, because it meant that customers could send detailed credit card information to a company without worrying about who might be looking.

In the mid-1990s, future giants like Amazon and Alibaba started popping up. From there, it was a matter of consolidation as these giants expanded, built up their delivery capacity, and shifted customer expectations.

What kinds of ecommerce stores are there?

If you can think of it, it probably exists. But it’s worth thinking about some of the specific types of stores you might recognize:

Are there any websites that aren’t primarily ecommerce?

Given what we know about ecommerce, you might wonder if the market is so large that any sites don’t participate in ecommerce. And it’s true: ecommerce is huge. But there may be some sites that aren’t particularly interested in selling you something, either. Blogs, information websites, Wikipedia, and social media primarily focus on other content. However, keep in mind that even social media sites have powerful advertising platforms that have shaped the ecommerce world.

Where is ecommerce headed in 2022?

It’s hard to say. But there’s one thing that we know will be the case: it’s heading up. The ecommerce world continues to expand. People are creating more and more stores than ever before, and it’s going to continue to change the landscape in profound ways.

When should I avoid ecommerce?

There is, of course, a downside to ecommerce. There are people out there who might try to take your credit card information and do something fraudulent with it. There may be people who sell you something that isn’t quite what they represented in an online store.

But as with any type of business, ecommerce is a world in which you’ll have to learn the lay of the land. Is it worth it? Of course. As more and more people become familiar with ecommerce and willing to make purchases online, that landscape is only going to get more popular. Today’s consumer wants to be able to make one-click purchases and smartphone-based transactions. As ecommerce expands, that friction will only get lower. And it’s up to you to adapt.