There are more benefits to great investors than money. Here’s the story of our latest deal.

I’ve written before about turning down investors.

About focusing on sustainable long term profits, rather than plotting potential future funding rounds as milestones.

About how not enough companies are doing enough with the cash that they already have.

So it might seem odd, or even hypocritical, that last week, I signed a deal with a new investor.

And it might seem even more odd that we took the money with no need for it at all. In fact, when we signed the contract, I didn’t even have a specific plan yet for where to allocate the cash.

Still, I’m more excited about this investment than I have been about any decision that we’ve made in quite some time, and it’s going to create a huge opportunity for us in the coming months and years.

In this post, I share the story behind the deal and why we took it, and why it’s an approach that you may want to consider as well.

There Are Things More Valuable Than Cash

Groove is profitable, and we’re growing at a pretty healthy clip.

We’ve put a lot of thought into our plans for the foreseeable future, and we have the resources that we need to execute on them.

I’m still confident that our strategy is a sound one.

In addition to passing on VC funding, I get emails quite often from investors who read the blog and want to talk about buying a stake in Groove. I’ve turned them all down.

Trading equity in Groove for cash that we aren’t hurting for, hasn’t been a tempting proposition.

In addition to writing about turning down funding, I’ve also written about the value of mentorship, and how important it is to connect with people who can help you get ahead in business and in life.

Smart advisors have helped us tremendously in getting to where we are today.

And recently, we got an opportunity to bring one of those smart advisors onto the team.

Our My First $100K interview series on this blog has helped us connect with a number of smart, successful, interesting people with invaluable insights to share.

One of those people is David Hauser, the co-founder and former CEO of Grasshopper, which was acquired by Citrix this year.

David is an accomplished entrepreneur who has been successful in a market that looks almost exactly like ours.

And more importantly, he’s an entrepreneur who embodies values that are incredibly important to me, and aligned with the way that we try to run Groove as a company.

To get an idea of how David thinks about business, take a look at the investment perspective he shares on his AngelList Syndicate page, and consider how much it differs from so many of the investors active in the SaaS startup space.

Since our interview with David went live, we’ve been keeping in touch with him.

No, we didn’t choose him for the series with this goal in mind, but this is another great example of the potential non-obvious benefits of content marketing.

David has shown a deep understanding of our space, asked us pointed questions that challenge the way we do things, and helped us think about the obstacles we’re facing in completely different ways.

And all of that occurred when he had no vested interest in helping us.

It’s rare to find someone with whom you align so deeply and is so uniquely qualified to help you, and I knew I wanted to work with David.

At that point, the only question that remained was how we could get him involved.

Why Not an Advisory Role?

Hiring David was out; he had just exited from his company, is focused on what’s next and on supporting other entrepreneurs, and it wouldn’t have been something we could have sold him on.

The next best approach, in the perspective of many startups, would be to bring David on as an official advisor, where he’s given equity in exchange for his guidance.

Unfortunately, this approach might not be as mutually beneficial as it may seem, as Jason Calacanis points out.

Advisors exist in the world because there are people who could be valuable to your business, but who do not have the money to invest like angels and VCs do. Advisors ask founders to trade “advice” and “work” in exchange for equity.

Founders who haven’t raised money yet typically get advisors because, well, they are unable to get investors! Cynics (typically VCs) say things like, “if you could get investors — who advise for free — why would you get advisors who don’t put any cash at risk? Those people are not earning their equity!”

The cynical folks are right 80% of the time — the advisors don’t earn their shares.

I have no doubt that, in an advisor scenario, David would have “earned his shares.”

He’s already been extremely generous in helping us, and I’m confident that he would’ve been a valuable advisor.

But there’s also the issue of perception.

On top of his experience, two of the great assets that David brings are his network and the respect he has in the SaaS industry.

To a company that we want to bring on as a Groove customer, or to one that we want to work out a high-level partnership with, there’s a stark difference in how much value David’s engagement with Groove has depending on whether he’s an advisor who got some shares for answering questions for us, or an investor who believed in Groove enough to put some skin in the game.

That’s the kind of value we really wanted. In addition to David’s expertise, I know that having him onboard will add to Groove’s credibility, and the more involved he is, the more weight that credibility can have.

Ultimately, rather than an advisory role, I thought that the agreement could be made much more valuable by getting David as an investor.

Although the parties involved are quite different than in our scenario, I recalled an old post by Jason Fried on the 37signals (now Basecamp) blog about 37signals taking a small investment from Amazon founder Jeff Bezos’ fund.

Jason’s post captures much of what I was thinking:

Today we have a very special announcement to make: Bezos Expeditions, a personal investment company of Jeff Bezos, has made a minority private equity investment in 37signals.

Here’s some background on the decision.

Over the past two and a half years we’ve accomplished a lot on our own. We’ve released 5 products (Basecamp, Backpack, Campfire, Tadalist, and Writeboard) which over 500,000 people have signed up for so far, wrote Getting Real which has sold nearly 20,000 copies in less than six months, changed the web development world by writing and open sourcing the Ruby on Rails framework, presented at conferences around the world, and more. We’re proud of what we’ve been able to do without outside help. But we think we can do even better with the right kind of help. And we’re picky.

Since we launched Basecamp we’ve been contacted by nearly 30 different VC firms. We’ve never been interested in the typical traditional VC deal. With a few exceptions, all the VCs could offer us was cash and connections. We’re fine on both of those fronts. We don’t need their money to run the business and our little black book is full. We’re looking for something else.

What we’ve been looking for is the wisdom of a very special entrepreneur who’s been through what we’re going through. Someone who sees things a little differently and makes us feel right at home. Someone with a long term outlook, not a build-to-flip mentality. We found a perfect match in Jeff. Jeff is our kinda guy.

It will be great learning from Jeff as we build 37signals into one the great companies of the next 20 years. Daniel Burnham, the great visionary architect of Chicago, said, “Make no little plans; they have no magic to stir men’s blood and probably will themselves not be realized.” We agree.

We hope this boost of ambition, and Jeff’s personal vote of confidence, will help us achieve our big plans.

So here we go.

And so, inspired by the Basecamp example, I floated the idea by him… 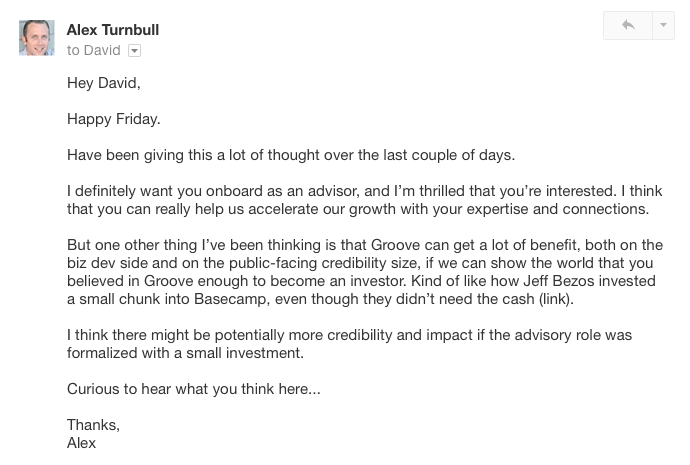 Not five minutes later, David was in:

That email exchange took place two Fridays ago. On Monday, we signed the paperwork.

Ultimately, the deal consists of three major expectations that David will deliver on:

And now, we get to work.

There’s a lot of discussion—including on this blog—about the danger of using investors as a crutch.

And I think it’s important enough to repeat: most startups will not get disproportionate value from taking on venture financing.

But there are much more strategic uses for investment as well.

And if you’re doing the right things to connect with people who can help you, opportunities like this will arise for you, too.

When they do, a small equity stake in your company could be a small price to pay for a lot of value.