Building relationships with influencers is valuable, but it’s also hard. Here are the biggest mistakes to avoid.

I’ve been vocal about how important mentors have been in my growth as an entrepreneur and Groove’s growth as a business.

Connecting with people more successful than myself has helped me make huge leaps in understanding how to overcome some of the biggest challenges we’ve had.

But networking with truly successful people isn’t about mingling at startup happy hours.

It’s about sticking your neck out, getting creating and investing the time and work to prove your worth to the people who can help you succeed.

Of the thousands of attempts I’ve made to connect with influencers, most have failed. But the ones that haven’t more than make up for it.

Through the process, I’ve also learned a lot about what works and what doesn’t work when it comes to emailing important people.

I’ve learned from those mistakes.

And today, I hope you will, too.

1) Not Realizing the Value of the Influencer’s Time

I’ve heard “no” a lot when trying to connect with people. But perhaps the most memorable no came pretty early on in my journey as an entrepreneur.

It was from a pretty prominent founder and angel investor who called me out, without mincing words, for asking for “just 30 minutes” of his time. 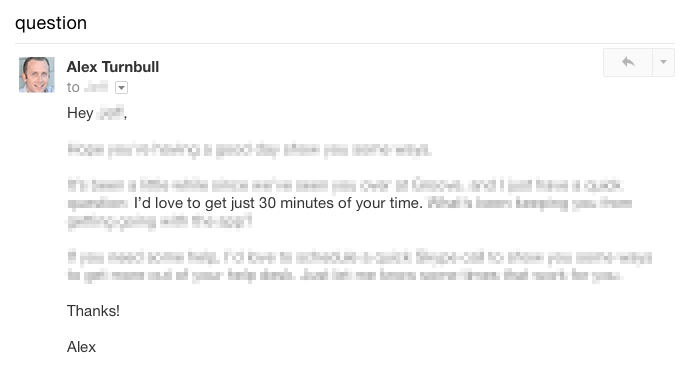 And he was completely, undeniably right.

When you’re at the bottom, your time isn’t worth all that much (from a dollar value perspective). You put in the hours and the hard work to build a life where one day, that time becomes worth a whole lot more.

But when you’re at the top, your time is incredibly valuable. Many founders, CEO’s and other influencers I’ve been lucky to meet with for free charge many hundreds, and sometimes thousands of dollars per hour for their advice.

Realizing that gave me a big shift in perspective. “Just 30 minutes” to me might mean hundreds of dollars to the person I’m asking for time from.

It gave me an appreciation for people’s time and expertise that changed the way I approached getting advice from successful people.

I valued it more.

I recognized it for the extremely generous gift that it was.

I acted on it because I owed it to the person who gave me that gift.

And I never used “just” to qualify how much time I asked for again.

Takeaway: Realize that in most cases, the time and attention you’re asking for is actually a far bigger ask than emailing someone and asking them to send you a check for $100. Recognize how valuable their time is, and choose your approach with that in mind.

2) Assuming You Have No Value to Offer

My biggest struggle when I realized how valuable an important person’s time might be was trying to figure out how I could make it worthwhile for them to give their time to me.

A big part of that is finding people who get value out of helping others, and that often takes hearing a lot of no’s before getting a yes.

But another big part of it is understanding that you can actually give the person something of value.

Most of the people who you might want to meet don’t need your money. But they have challenges just like the rest of us, and helping them solve those challenges can go a long way toward building a mutually beneficial relationship.

Below is a perfect example of a real email that I got. (When I talk about “important people,” I’m not referring to myself; I use the tips in the article to connect with actual important people. I’m just sharing this because it’s a great case study in how to offer value to somebody who you want help from.) 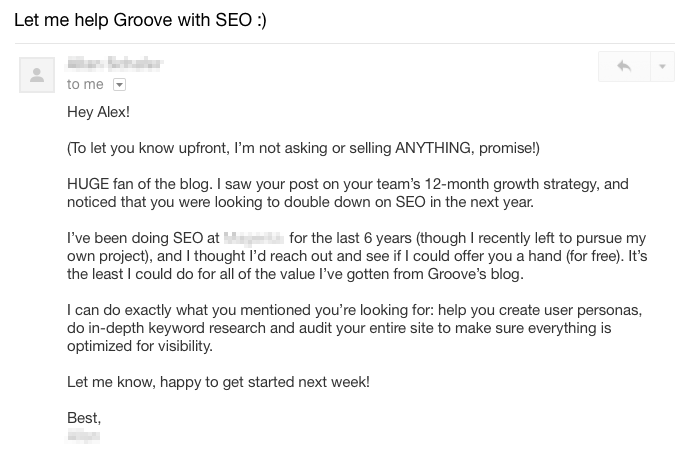 Takeaway: Don’t assume that you can’t offer anything valuable to an important person. They have problems, too. Solve those problems for them, and they’ll be happy to help you.

Want to show that you don’t value someone’s time as much as your own?

It’s easy. All you have to do is ask them a question that:

I’ve made all three of these types of blunders, and I’ve learned painful lessons from doing so.

These all signal that the other person’s time isn’t particularly valuable to you, or that you’re either unwilling or unable to put in hard work yourself.

Takeaway: If you get the privilege of being able to ask someone for help who has solved the same problem you’re facing before, then make it count. Take the time to research, get informed, and come up with questions that they are uniquely qualified to answer.

4) Looking for an Answer, Rather Than a Framework for Coming Up With the Answer Yourself

I’ve asked a lot of questions, and I’ve gotten a lot of answers. Through the years, one thing has become very, very clear: when a mentor tells me what action they think I should take, the benefit is typically, though not always, small.

However, when a mentor tells me how they think I should think about the problem at hand, I get insight that I can derive value from forever.

Successful people aren’t usually successful because of a decision that they made.

They’re successful because of the decision-making frameworks that they’ve used for their entire careers.

For someone looking to learn and better themselves in the long-term, that’s where the gold is.

Takeaway: Don’t focus too much on asking for what you should do, unless you have a particularly pressing problem at hand. Instead, get feedback on how to think about what you’re facing. You’ll get answers that will be valuable for you for far, far longer.

I used to think that the couple dozen emails that I got each day were a lot.

That was until I got 50 per day. Then I thought that was a lot.

And that number has continued to climb.

Still, that doesn’t even begin to approach the level of email that some truly successful, well-known and connected people receive.

I love this infographic on Neil Patel’s contact page explaining why he can’t answer every email.

If you’re getting 200+ emails per day and you have a job to do that doesn’t consist of answering emails, then you’re going to have more emails than you can respond to.

That’s the position most influencers find themselves in. And if they’re three hours into a marathon email-clearing session and open a message that contains a wall of text, how motivated do you think they’ll be to respond?

If you want to stack the deck in your favor, keep your email short and concise. Better yet, have someone else read it, and ask them to be as critical as possible about anything they think you can cut.

Takeaway: The purpose of your email isn’t tell your whole story. It’s to get permission to ask for advice or a meeting, or to ask a quick question. Try to keep it to no more than a few sentences, especially if you’re emailing them cold.

This might be a surprising mistake to anyone, like me, who doesn’t want to be seen as annoying or pestering.

But it follows from the fact that important people get a ton of email and are just generally very busy: things are bound to slip through the cracks. It’ll happen. Maybe they’ll see your email, intend to respond and forget about it. Or maybe they won’t see it at all.

There’s nothing wrong with a single, polite follow-up after a week or so:

Takeaway: Don’t assume that a lack of response means that the other party isn’t interested. Send a short and friendly follow-up a week after your original email. You have nothing to lose, and a lot to gain.

Learning to be okay with hearing the word “no” is an important skill for an entrepreneur (or just about anyone, really).

But more than that, it’s important to understand the true dynamic of trying to connect with an influencer or mentor: you’re asking for a lot, and not offering a lot in return. Assume that the default answer is “no,” and be thrilled if you get a yes.

I find it helpful to assume that people generally have good intentions.

There’s a really good chance that the people you’re emailing for help will say no for an excellent reason, like:

These are all perfectly valid reasons, and there are hundreds of others; none of them should insult or offend you.

Takeaway: If you spend time trying to connect with mentors (and I suggest you do), expect to hear “no” a lot, and be okay with it. It has nothing to do with you.

About five years ago, I emailed a founder to see if I could meet with him to get some feedback on the idea for Groove.

He (politely) turned me down.

A few years later, I emailed him again.

Today, he’s an invaluable mentor to me, and a trusted advisor to the company.

He said “no” at first because he was busy trying to get his third startup off of the ground, and couldn’t make the time to meet with me.

After a while, things quieted down, and my email came at the right time.

Just because someone turns you down today, doesn’t mean that they won’t be happy to help you down the line. That’s why when you do get turned down, stay gracious and don’t burn bridges:

If you don’t take no’s personally, this becomes a lot easier.

Takeaways: If someone turns you down, give it a year and try again. You might both be in a different position, and you might find that they’re more willing to help.

Whether it’s connecting with mentors, trying to get business questions answered or getting influencers to share our content, I’ve spent thousands of hours working to connect with people more successful than myself.

While it’s been one of the most valuable things I’ve done for Groove and for myself as an entrepreneur, I’ve also made a lot of mistakes.

I hope that this post helps you learn from the mistakes I’ve made and seen, and helps you connect with the people who can help you grow your business and yourself.