Figure out who your best customers really are.

A few years ago, we were getting ready to test a big PR push to get the word out about Groove.

We put our heads together and tried to think about all of the different publications and influencers who we could reach out to that would be relevant for our market.

We spent hours putting together a spreadsheet, meticulously hunting down email addresses and crafting personalized pitches that would be sure to hit their mark.

While the test wasn’t very successful (for reasons I’ll go into in another post), we did learn one valuable lesson from the aftermath that made the entire effort worth it.

A week or two later, I sent the outreach list to a friend of mine; a founder who had successfully grown his own business by building great relationships with press outlets. If anyone could find the holes in our strategy, it would be him.

His reply came less than ten minutes later in the form of a phone call.

Uh, why are these all startup-related?

I thought you said you had agencies, schools, ecommerce retailers and other users in dozens of industries. But this list reads like a “who’s who in tech startups.”

He was absolutely right, and the lesson clicked immediately for me.

I had been thinking way, way too small. I spend so much time engaging in the “startup community” that I had blinders on. When it came to marketing, these were the people I felt comfortable reaching out to, because I knew them best.

But it was the wrong move, it cost us a lot of traction early on, and worst of all, I see startups continuing to make this mistake all the time.

Your Inner Circle Is Not Your Whole Market

My friend was right. We were too focused on our inner circle, and it was causing us to miss the bigger picture.

So we decided to try and figure out exactly what that bigger picture was.

A week later, when we sent a survey to our most active customers that included the question “What does your company do?”, even the first handful of responses made it very clear that our assumptions about selling to tech startups were, well… completely baseless.

What does your company do?

It’s easy to assume that you’re selling your product to yourself and people like you.

You already know who you trust, and whose advice and recommendations you’d listen to.

You’re already in your own head, and you don’t have to work that hard to understand yourself.

But you’re only going to get so far selling to your inner circle.

What That Means for You (The Bad)

If you’re only selling to your peers, and you’re concerned that you’re not selling enough, here’s the bad news: you’re going to have to do some hard work.

You’re going to have to do real customer development. Talk to people. Figure out who your product or service has value for that’s not like you.

And work to deeply understand their challenges, goals, fears, dreams and the words that they use to describe all of those.

You can start with your existing customers. You might be surprised at who might be getting value from your business that doesn’t fit the persona you may have concocted in your head based on assumptions.

Feel free to use our customer development email script to get the conversations going: 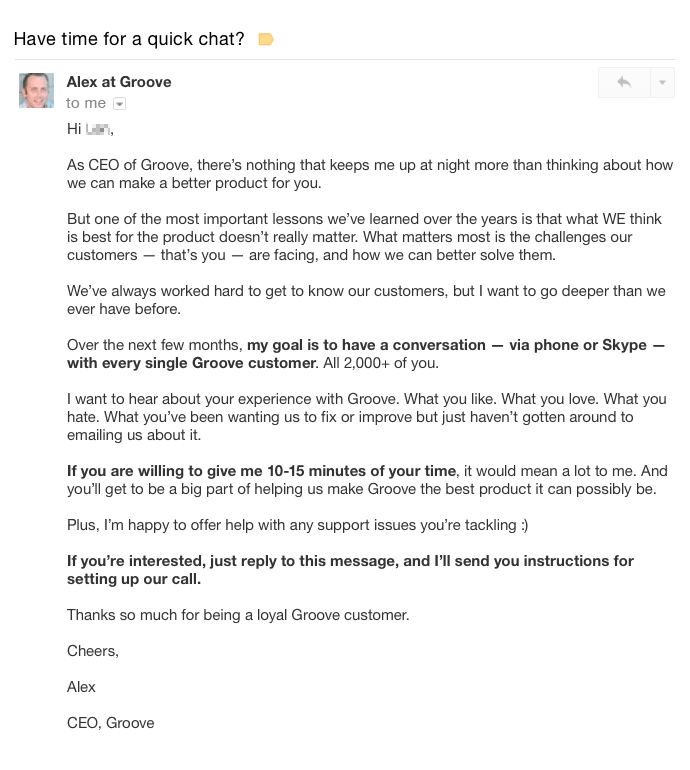 I sent this email out, and within an hour, my inbox began to fill up:

The conversations that resulted from these emails gave us massive insight into who our customers actually are, and how we need to be talking to them.

Rather than ask a series of scripted questions, I started each call with an open-ended guideline:

Hey, thanks so much for agreeing to chat. I won’t take too much of your time. The conversations I’ve been having with customers have been invaluable in helping us shape the product and our plans for the future, so I’m excited to get your feedback.

My goal is to get an overall feel of how you’re using the app, what you like, what you don’t like, and what we can do to make it better. I’ll let you take the floor.

Usually, the very first thing that people told me turned out to be the most important part of their user experience, from their perspective. And often, those important elements didn’t line up at all with what I had assumed people would say.

There were more than a few surprises, including bugs we didn’t know existed, minor (to us) features that turned out to be hugely valuable for some users, and yes, use cases for Groove that we had never seen in industries that we never even considered.

Suffice it to say that we learned that our early startup-centric copy was more than a little bit misguided.

What That Means for You (The Good)

But here’s the good news: your business has so much more room to grow than you probably thought.

If you’ve been selling in your own bubble, then you’ve been limiting yourself to a tiny sliver of what your true market probably is.

Now, there’s nothing wrong with selling to a hyper-targeted niche, as long as that niche is the best one for your business.

If you’ve done the work and identified your bubble as that best niche, then good job.

But if you’re operating based on assumptions, then your opportunity to expand your market is massive.

Here’s how to do it:

From there, you’ll be in a position to make major corrections and improvements to your marketing, and unlock huge opportunities for your business.

I published this post because I know that we’re not the only ones who’ve made this mistake.

I see it all the time with companies everywhere, and especially with tech startups.

If you’re doing the same thing, then I hope that this post helps you catch yourself and change things for the better.