As a founder, some decisions come naturally to me. This was one of the hardest I’ve ever had to make…

To some readers, this post is going to seem self-indulgent.

Like I’m congratulating myself for not giving in to temptation.

Truthfully, the fear of coming across that way was almost enough to keep me from sharing this story.

But I sent a draft to a founder friend of mine, and within a few minutes he shot back:

Many founders who persist for long enough do have to deal with something like this at one point or another.

So in the hopes that this ends up helping another founder going through a similar decision — and because I’ve worked hard to make a habit of sharing* everything*, no matter how uncomfortable, on this blog — today I’m sharing one of the most difficult decisions I’ve had to make as an entrepreneur.

In early summer of this year, I was approached by a business development executive at a big software company.

He and his team were tremendously supportive of our business, and gave us lots of great insight into growth that their employer used to become successful.

This isn’t the first time I’ve been approached by someone in that position. In the past, we’ve had conversations about Groove, our growth and our goals, and it usually ends there. I’ve never expressed interest in selling the company.

On the other hand, I almost always try to steer the conversation toward partnership opportunities; our product partnerships have been big wins for our customers, and they’re a big part of our growth strategy.

This time, it was different.

It’s not a company that would be a natural product partner for us. And it’s not a company I would expect to want to add customer service software to their offering, so I wasn’t quite sure what to expect.

I wish I could say, for the sake of story, that there was a dramatic “offer” moment where a number was written on a piece of paper and slid across the table. That would’ve made for a much better post.

But in reality, the situation unfolded over a few months of discussions. We had a handful of meetings with their business development team and executive teams, and their engineering team did a thorough technology review of Groove.

Finally, I got the call that I knew was coming: they wanted to acquire Groove. Details and due diligence would have to be sorted out, but the acquisition price was just under $12 million. Our whole team would stay onboard.

At the time, I was floored.

Our monthly revenue was around $70K at the time, making $11.8M a 14x multiple on our annual revenue. Even in SaaS, that’s on the very high end of the norm, and a multiple generally reserved for highly profitable companies (or ones with massive user bases).

It was certainly far more than I expected.

Over the next several days, I spent a lot of time talking to my team, mentors, advisors and family.

The most compelling argument for taking the offer? I’d be an idiot not to.

With my owning more than 50% of the company, the money would, without a doubt, be life-changing.

There’s not a whole lot that that kind of money wouldn’t buy you. 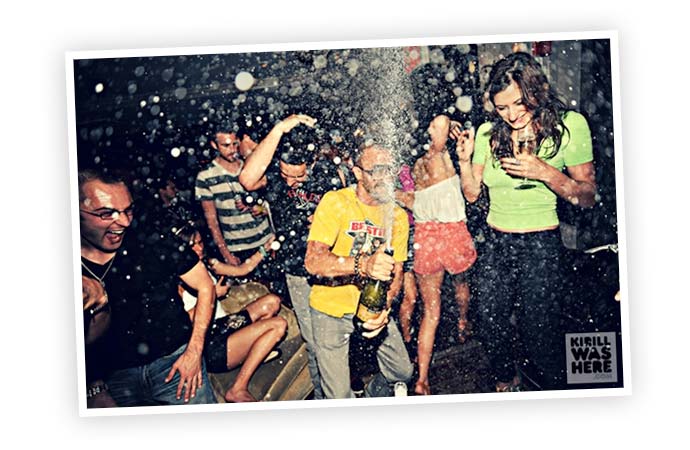 I love what I do every day, but there’s no doubt that there are days when it absolutely sucks.

The money would also be business-changing.

Our product roadmap is aggressive, and having the backing of a large benefactor would let us hit our targets much faster. It would let us build an even better product and spend more on marketing to reach even more customers.

But that’s precisely where the benefits begin to unravel (more on that in a bit).

Almost a week later, I picked up the phone.

And then I put it down.

I picked it up again.

And put it down.

I went through this cycle three or four times before I took a break and went for a walk.

It was a call I really didn’t want to make.

I wandered for an hour before coming home. Angry at myself for stalling, I gritted my teeth, dialed the number and forced myself to hit “Call.”

It went to voicemail.

Asking him to call back, I settled in for an agonizing hour while I waited, fidgeting and completely incapable of doing any work.

Slowly, painfully and with as much certainty as I could fake, I somehow managed to get it out: “I can’t tell you how much I appreciate the offer, but it’s not the right move for us right now.”

Why I Said No to the Acquisition

A serial entrepreneur friend once said something that’s stuck with me:

First-time founders care most about their exit. Every time after that, you focus on legacy.

I’m not sure that he was the first to say it, and I have no doubt that it doesn’t apply to everyone, but I like to think it rings true for me.

After my last company got acquired, I didn’t set out to build something I could sell.

I started Groove to build something that would make something that was a massive pain for me — managing customer support — better for the millions of businesses that I knew it was a pain for, too.

We’ve come a long way toward doing that, but the amount of ground we haven’t covered dwarfs how far we’ve come by many, many multiples.

I’ve seen what happens to customer service companies that get acquired by giants or take in many millions of dollars in funding.

Products that founders swore they built to be “simple” got bloated, overdeveloped and lost sight of their vision.

I see customers coming to Groove every single day from these companies precisely because of what happened after our competitors got so big.

Nearly everyone who gets acquired sends an email to customers along the lines of: “Everything will stay the same, we’re just going to have more resources to make things better for you.”

Everyone who’s used apps built by these acquired companies know that sooner or later, that promise almost always turns out to be bullshit.

I can’t risk Groove becoming part of the problem, the enemy of what we set out to create.

We may be successful in some ways, but we’re still young, and we’re still fragile. There’s too much at stake.

The time may come when an acquisition makes sense, when I’m certain that our customers and our product can still win if ultimate control of the company changes hands.

But that time isn’t now.

I know what some readers are thinking here:

This is BS. Everyone has a price, and if the offer were big enough, none of those soft reasons would’ve mattered.

And while I disagree that the other factors wouldn’t have mattered, let’s talk about price.

At the time of the offer, our monthly recurring revenue was around $70,000. A $12M acquisition would be a 14x multiple on annual revenue.

However, we’d been growing very steadily and predictably at around 10% per month.

After $100K, most companies see that growth rate to begin to drop incrementally. Still, it’s reasonable to assume that, even at an average growth rate of 6%, our MRR could be close to $200K at this time next year.

At a 10x multiple (still high but lower than what we’ve been offered), that’s an acquisition price of $24,000,000. Double what the company would have sold for this year.

Even if the other shareholders and I choose to take a dividend on the company’s profits — a very likely scenario, and one that’s a lot more appealing to me — rather than selling the company, we’d still fare better in a year than by taking $12M today.

Obviously the math here is far from black and white. There are hundreds of intangibles at play, and hoping to time the market properly has shown itself to be a sucker’s bet for founders many, many times.

But it’s hard to deny that the upside in a year looks much, much better than it does right now.

The 5 Ultimate Questions for a Software Company Considering Acquisition

In retrospect, for me, the decision ended up coming down to five big questions: 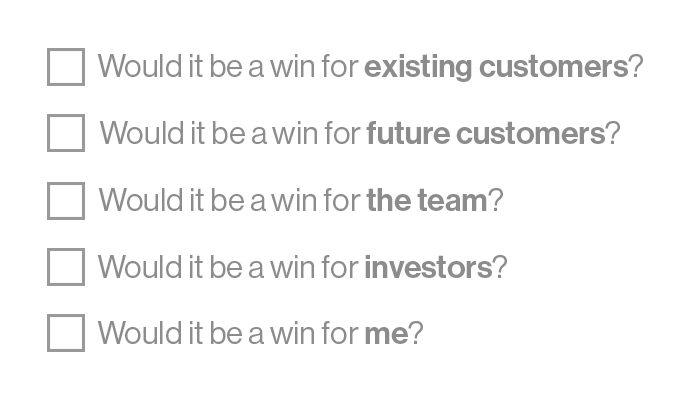 1) Would It Be a Win for Existing Customers?

To me, this was a clear no.

We’ve spent three years and a lot of sweat building relationships with customers who trust us to make sure that they have a great customer service product.

The risk of letting them down before we’ve achieved our product goals would be more of a personal failure than I can accept.

2) Would It Be a Win for Future Customers?

But unless we maintain the strength of the existing product, that doesn’t mean much.

Financially, yes. Everyone who has a stake in Groove’s success would win handsomely, and our whole team would be working for a stable, well-known company.

This was probably the hardest “win” for me to reconcile, as the Groove team has worked their asses off to get us to where we are. But in open, honest conversations, we agreed that the upside would be bigger to keep our heads down and keep building.

And beyond the upside, one of our employees noted that he didn’t want a “prison sentence.” He came onboard to work at a growing, fast-paced startup, not a bigger, slower enterprise. Others agreed.

4) Would It Be a Win for Investors?

Somewhat. This would’ve made our investors much more than whole.

But after talking to them about how I felt about the offer, and considering how dramatically their upside could improve if we waited and kept working, they supported my decision.

There’s no doubt the money would make a huge impact on my life.

But in the end, it simply wasn’t the kind of win I wanted. If our customers, our team, our investors and our legacy don’t win, then neither do I.

With this framework, and without five clear yes’s, the decision became a lot easier.

To be completely honest, if a founder came to me in the same position and asked for advice, I’d probably tell them to take the money.

But for Groove (and our goals), I feel confident that we made the right choice.

I also recognize that most businesses won’t deal with this problem.

But MANY businesses, once they reach a certain point, get offers for acquisitions, acqui-hires, big investments and partnerships.

While each of this is a drastically different scenario, I hope that the framework I used will be helpful to you as you make one of the most difficult decisions of your entrepreneurial life.