We’ve been working with a business coach for a full quarter now. Here’s what we’ve learned.

Last week, four of us traveled to Boston to meet with our growth coach.

It was the second time we were meeting—I wrote about our first meeting, in December, here—and while much of what we did was similar to the first retreat, it felt very, very different.

We learned a lot.

We made some hard decisions.

We voluntarily failed to make others (more on that below).

And we left energized and ready to tackle the second quarter of 2016, with goals and strategy set in place.

Even if you don’t have access to a business coach, my goal in sharing our experience is to help you achieve the same benefits for yourself. Before you read this post, I’d encourage you to read about our first retreat if you haven’t yet.

Today, I’ll share what we did in our two days together, along with some insights that I hope will help you grow your business, whether you’re working with a coach or not.

What We Did for Two Days in Boston

On Sunday night, one by one, we began to arrive in Boston.

With folks flying in from Denver, Wilmington and Baltimore, and myself and our coach driving in from Newport and Connecticut, respectively, we wanted a “home base” that would be reasonably accessible for everyone.

We knew from our first retreat that there’s a lot of value in staying together as a team—rather than spread out across hotel rooms—so we opted for a 5-bedroom Airbnb house in South Boston that turned out to be perfect for us, with a kitchen, private bedrooms for everyone, and a working space (that doubled as a bedroom at night) that comfortably fit us all.

We spent the first night watching TV, eating and waiting for other team members to arrive. We didn’t “do” anything, but it was nice to catch up.

Team Retreat Tip: There’s a ton of value in staying in a house over a hotel, especially when it comes to cooking and eating meals together in the kitchen and unwinding together in the living room at night. It’s also been much cheaper than hotels in our case. Make sure that there are enough bedrooms for everyone to have a private space.

On Monday morning, we got to work. 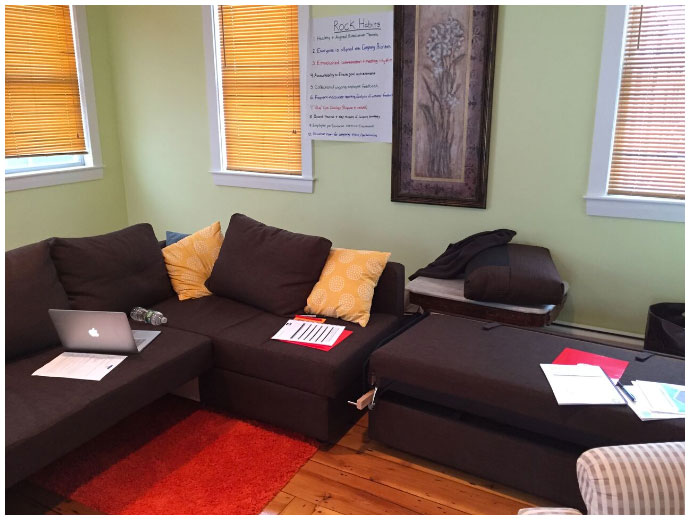 He’s is a Gazelles coach, and so naturally his approach is in line with the lessons from Scaling Up. If you’re building a business and haven’t read this book, it can empower you to be your own effective business coach. 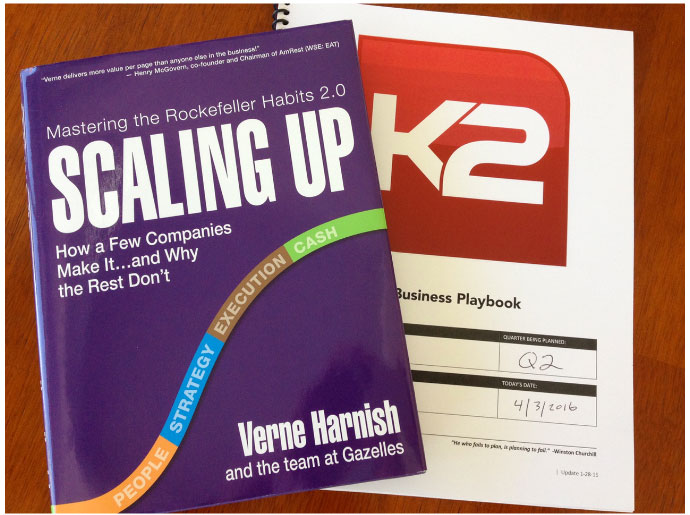 We spent the entire day looking back at the quarter behind us: 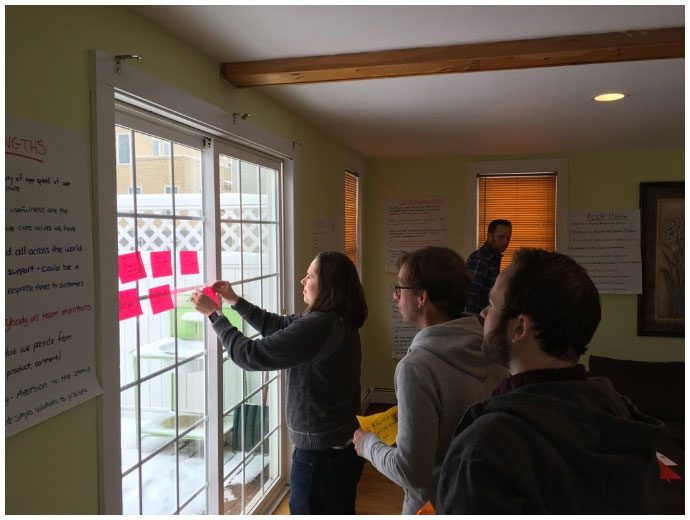 After a long day, we made our way over to Lucky Strike for some bowling, which was the perfect way to end the day, and where Lesley bowled a 179 and Jordan tried—and succeeded—at breaking 20mph: 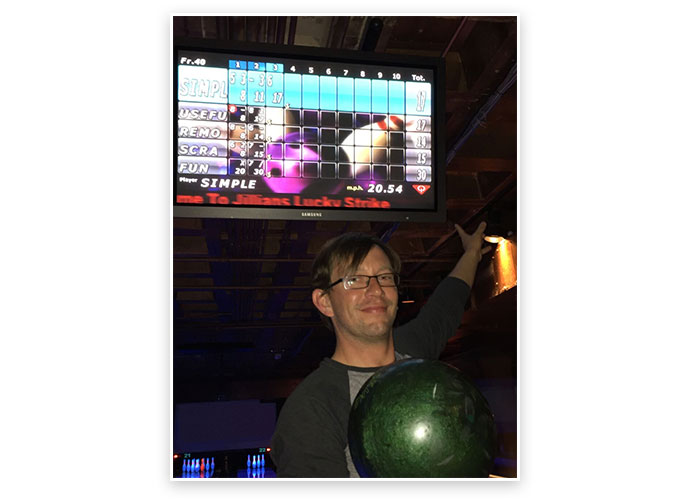 Team Retreat Tip: Plan for fun activities, as these can have just as much benefit as the work that you do together. Letting loose and enjoying ourselves without talking about Groove was a great way to build a deeper relationship as a team.

Tuesday was all about looking ahead. We thought about our company priorities for Q2, and he walked us through an exercise for each one that required us to ask four simple questions:

We then repeated this exercise for each team member’s individual priorities for the quarter, with the added steps of assigning deadlines to each step and aligning each individual priority to one of the team’s quarterly or annual goals, or one of our core values.

And then, we set an annual priority for the team. A priority is different from a goal in that the priorities are what help you accomplish your goals.

So, if our annual goal is $6 million in MRR, then our priority would be the thing or things we’d need to do to achieve that goal.

Another thing that we spent a bit of time on was talking about our BHAG; our big, hairy, audacious goal.

This is a concept that Rand Fishkin shared with us in his interview on the blog:

My favorite example is the moon mission. It had this super clear big hairy audacious goal: put a man on the surface of the moon, and return him safely to the earth.

The guy steps on the moon and comes back okay. All right, then we did our job, right?

I think that model works really well: set one big hairy audacious goal, and then all of your short term goals and tactics fall from that. It scales nicely, too.

We talked about what our own BHAG could be; a “north star” that, while seemingly out of reach, could at least keep us pointed in the right direction. And we settled on a number. A pretty big one, for us. 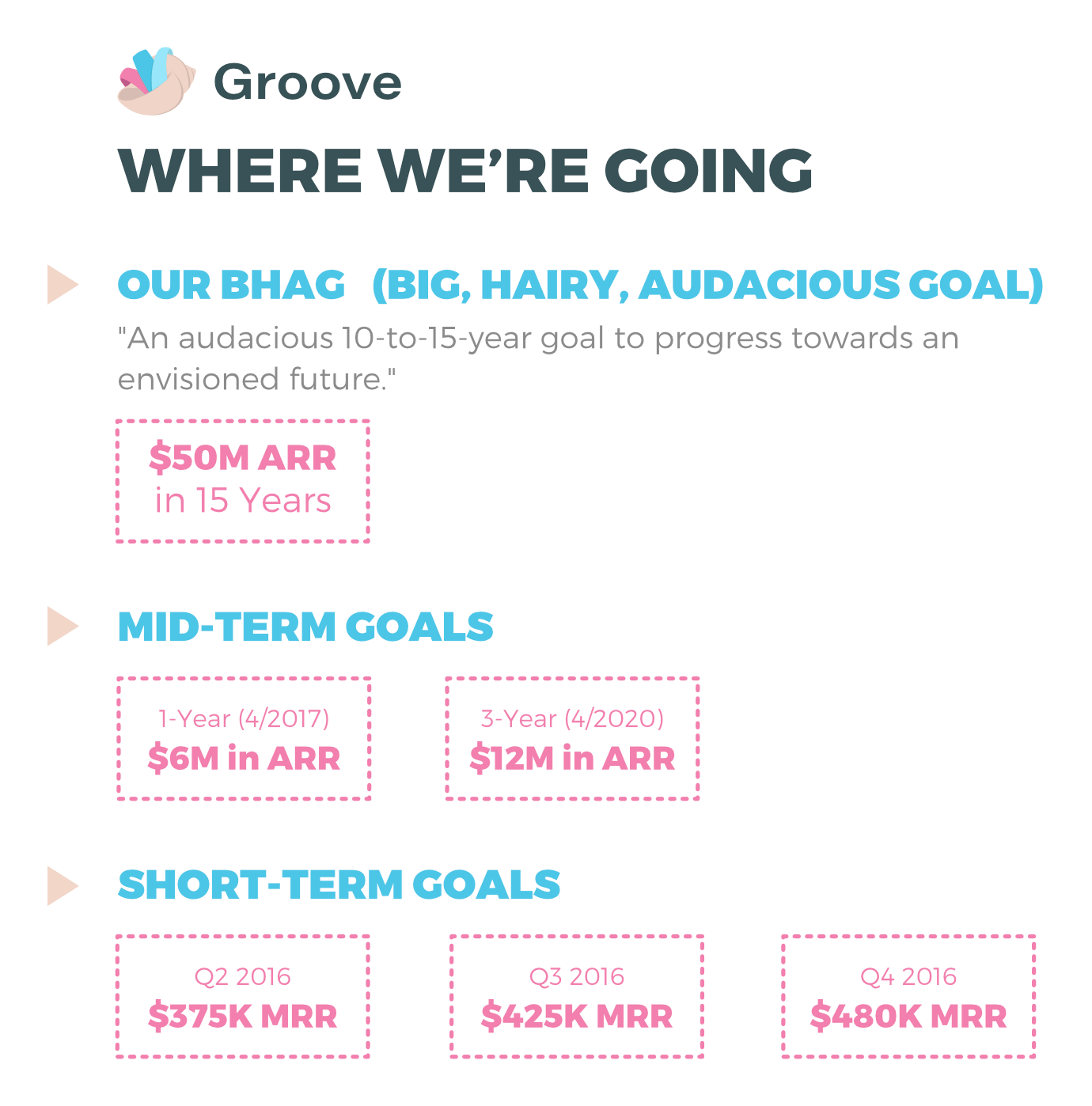 And finally, we got into a long discussion about our core values (which we’ve been working on for the last three months, and will be sharing in an upcoming post) and our core purpose as a business. For more insight into what these mean and why they’re important, I highly recommend watching Simon Sinek’s Start With Why talk:

This is something we’ve spent a lot of time on, and something we still have a lot of work to do on, but we made some great progress on it together and hope to roll it out in the coming weeks.

We worked on Q2 planning all morning, and he left shortly after lunch. At that point, we spent the afternoon working on getting our individual and team priorities into Trello, which we’ll be tracking on a weekly basis until our next quarterly meeting. This is something we admittedly need to get better as a team, but it’s critical that you’re not only looking at these goals and priorities every 90 days; they’re there in order to inform the decisions you make every day, and in order to do that, they need to be front and center, always.

After that, we planned a bit for how we would implement these priorities with the rest of the team in our post-retreat call, and soon after, headed out for one last dinner.

Team Retreat Tip: Even if you can’t bring the entire team together every quarter, make sure that as soon as you’re back, you get the team together on a call to go over what you did, gather feedback, and get everyone aligned on the next three months, especially since their own survey responses played a large role in creating those plans.

Between Tuesday night and Wednesday morning, the team, one by one, headed home.

While we didn’t do much that was all that different from our first retreat (other than looking back in the context of what we had planned), we accomplished and learned a lot.

Most importantly, we came away with a strong, clear plan for the next three months.

But on top of that, we also came away with five big takeaways that I think any team can benefit from, whether you’re working with a coach or not:

1) You probably suck at setting goals. But most businesses do (at first).

While we hit some of our quarterly goals, we didn’t hit them all. And while we were disappointed, coach told us not to worry.

It happens to every single business that I work with. At first, you bite off far more than you can chew.

For a long time, we had operated in a pretty scattered way, working on dozens of different things at once. Learning about the value of focus—and the dangers of ignoring it—has been one of my most humbling lessons as an entrepreneur.

But even with that lesson behind us, we still overshot.

Goal-setting is incredibly valuable and has helped us progress more, from a productivity standpoint, in three months than in the entire year before, but it takes some time to get it right.

2) In-person meetings are so, so important for remote teams

I can’t stress this enough. I said this in the post about our first retreat:

As a remote team, we don’t get the chance to get together that often. And for a couple of us, this would be the first time that we met in person.

Getting that time together was so, so important. We gelled more in just a few days together than we’ve been able to in years on Slack.

The impact was even stronger in the second meeting, as we were already past the “getting to know each other” phase, and felt comfortable from the outset.

We’ve already started the planning process to get the entire team together, and I can’t wait to see what it does for our culture and business.

3) Thinking in 90-day “bursts” is liberating

Narrowing your thinking to quarters—or even months—instead of years (like we did before with our 12-month plans) frees you up to do one very important thing: put things off without guilt.

That may sound like a negative, but it’s actually really liberating. When you’re faced with the hundred options that you’d like to pursue, it’s a lot easier to say “let’s pick one or two and look at the rest next quarter) than it is to say “we’re never going to do these”, or even worse, try to do them all.

Some things—important things, even—will have to wait, but working in 90-day periods means that you can always revisit them later, and if they’re still important (they won’t always be), you can tackle them then.

Coming back to last week’s post about the things that a business REALLY needs, a business coach isn’t one of them.

And while it’s sure been a worthwhile investment for us, and while I’d recommend it in a heartbeat for any business who can afford it, my hope is that by sharing our experiences and takeaways, you can get some of the benefits on your own.

Get the team together. Make time to think about strategy rather than just executing 24/7. Set achievable goals and make plans to achieve them. Be accountable to someone outside of the company (even if it’s just a fellow entrepreneur that you don’t pay). And revisit all of this regularly.

If you do those things, you’ll unlock systematic growth that will take you a lot farther than scrambling for the best tactics or growth hacks.