It’s been a busy couple of weeks. We made reading tickets quicker, fixed a few edge cases with our Widget, and cleaned up whitespace in incoming emails.

And we’re almost ready to release a couple new features into the wild.

This was a very simple fix that we think is going to save agents a ton of time everyday.  Previously when viewing a long ticket, we naively were scrolling the screen down to the bottom of the text.  This isn’t problem on a nice big screen. But on a laptop the top half of the ticket would be cut off, often only leaving a signature in view: 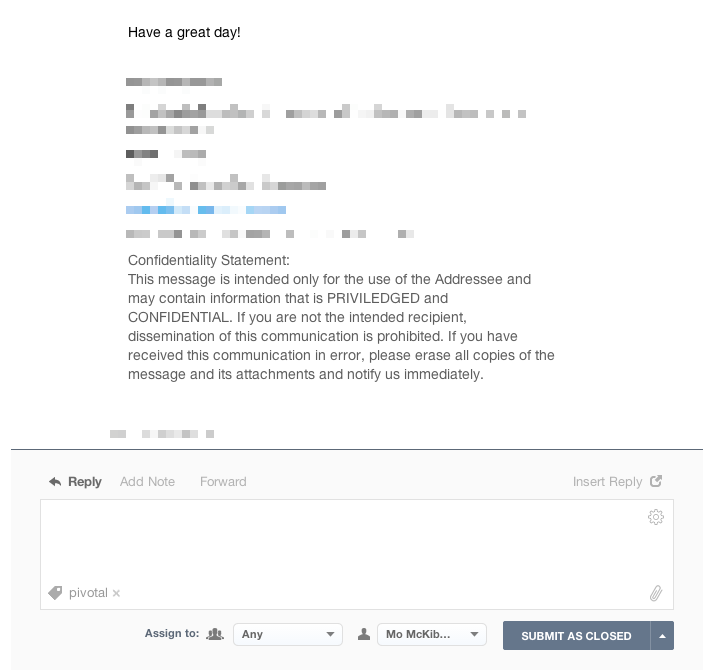 So everytime an agent viewed a ticket on a small screen, they had to scroll up to the top. Every. Single. Time.

Thankfully the fine folks over at Screenhero pointed this out to us. Now agents are always brought to the top of the last unread ticket, and mouse hands everywhere can rejoice!

We unfortunately had a couple edge cases reported with the Widget over the last couple weeks. It turned out certain combinations of Widget and Knowledge Base settings were conflicting with each other; leaving the Widget dazed and confused.

It took a bit of digging, but were able to locate the causes and now everyone’s Widgets are rending as expected again.

We also went back and gave email parsing a little more love.  We’ve always hated the fact incoming emails would come in with extra spacing before and after the message.

Not a huge bug by any means, but it just looked unkept. But no more! One of our developers came up with a very smart algorithm for stripping extra spaces and blank lines from HTML, which cleaned up these messages in one fell swoop.

We’ve also been pounding on some new features, including custom outgoing email servers and a whole new forwarding UI, to get them ready for primetime.  Curious types should be on the lookout for a link to the new beta environment next week.