After finding a surprise in our data, we set out to see if we could get more incoming customer support emails — on purpose.

This is part twelve in our ongoing series, Journey to $100K a Month. Earlier posts can be found here.

Early last year, Groove got serious about being a data-driven business. We began to track everything, and between our marketing efforts, sales interactions and user analytics, our massive cache of data was growing fast.

In May, I issued a challenge to our team: dig deep into our metrics, and try to find non-obvious points where we can tweak, tune and optimize to make an impact on our growth.

We found lots of little correlations; some that led to dead ends, and others that we still pay attention to today.

But what one of our developers found was more than a little bit shocking (to me, anyway).

In looking at our customer support data, he saw that free trial users who emailed us for support were nearly nine times more likely to convert to paying customers at the end of their trials than those who never reached out.

With the growing popularity of Knowledge Base software (even among our own customers), most businesses were trying to go in the opposite direction: get fewer support emails by helping customers help themselves, the assumption being that customers would rather have faster answers than wait to deal with a support agent.

Looking at our data, we wondered if everyone — even our own customers — had been doing it wrong.

Of course, we couldn’t take that data as gospel; it was far from statistically significant, and it didn’t account for variables on the reasons for the support emails.

But it was enough to get us to do a little bit of testing.

And I’m glad we did…

We had never tried to increase support tickets before, so we tested three different strategies to see what would work best:

We use Groove’s help widget (shocker, I know) on our app, and it puts a support tab in the bottom right corner of the user’s screen.

Previously, we had only been using the widget on the dashboard and a few select internal pages of the app, as there were pages where we simply assumed that users would never need support.

We tried putting the widget on every single screen within the Groove app.

Just for the hell of it, we also tested completely removing the widget from every screen.

When we removed the widget, support emails dropped like a brick — to the tune of nearly 50% fewer emails received. The widget was definitely helping, especially on the dashboard and ticket view pages.

But putting the widget on ancillary pages (for example, the Keyboard Shortcuts tab) had only a marginal impact: an uptick of about 1% more users emailing us. Hardly enough to make a dent.

Takeaway: A support widget can be incredibly effective at getting users to reach out for support, but for us, the gains were mostly on the primary pages of our app. Adding the widget to ancillary pages brought diminishing returns.

We knew that our users generally responded very well to emails. For example, our onboarding autoresponder emails — with calls-to-action that prompt the reader to go to the Groove app and complete specific tasks — get upwards of 30%+ clickthrough on first open.

So, we began to add customer support emails to our onboarding sequence.

At the three-, six- or eleven-day marks, some free trial users would receive support-specific emails prompting them to engage with us for help: 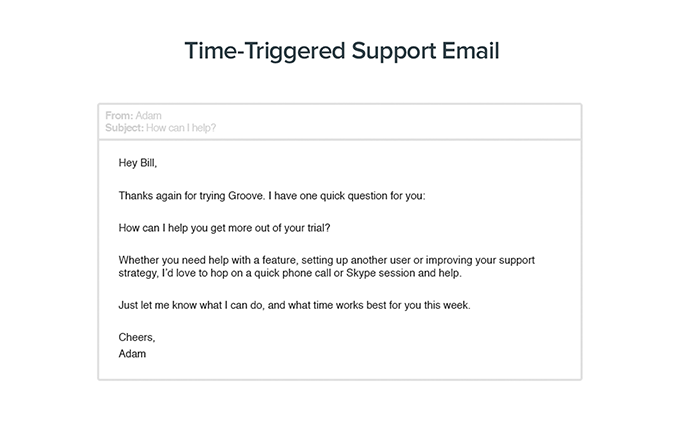 This email got almost a 22% response rate, and the users we ended up speaking with were 40% more likely to convert. Nowhere near the 900% from our starter data, but a significant improvement nonetheless.

Takeaway: As my mother told me growing up, you won’t get what you want unless you ask for it. Rather than trying to engineer user behavior through your app, if you want your users to do something, no matter how simple, just try asking.

As I wrote in my recent guest post on KISSmetrics, we know how long certain tasks within Groove are supposed to take:

Creating a rule generally takes between 10 and 30 seconds.

Customizing a support widget is 2 to 3 minutes.

We figured that some of the users who were spending far more time than average on these tasks might simply be stuck.

So we built a simple system that would alert us when a user would spend too much time on a particular task in multiple sessions.

Then, we reached out to the user: 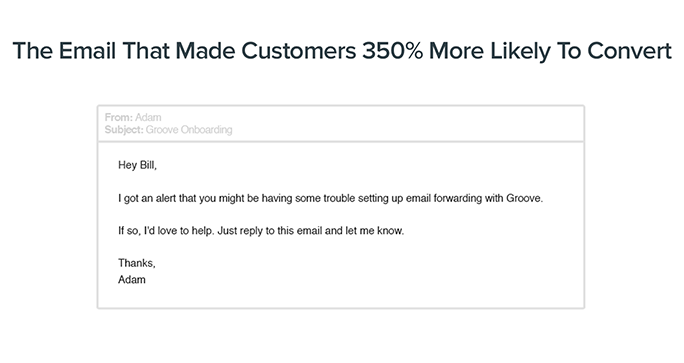 This email got a 10% response rate, and 30% of the users were still customers after 30 days; more than 350% higher than our average free trial users (we normally convert at about 8%).

Takeaway: You can probably identify “red flag metrics” that tell you when a customer may be having trouble with your app. Use those as an opportunity to reach out to those users and ensure that they have a good experience. Otherwise, the data suggests that they probably won’t email you; they’ll just leave.

Between the various strategies we tested, we were able to increase the number of trial users who emailed us by about 20% — and of that 20%, nearly 25% convert into paying customers.

Sure, I have my suspicions, but my suspicions are often wrong. Regarding the first two bullet points, we’re doing a lot of testing and customer development to get to the answers.

Regarding the third point, I suggest you give increasing your support emails a try. Or at the very least, look hard at your data to see if you can spot a correlation that warrants further testing.

But more than that, the lesson for me — and, I hope, for you — is that our deeply-held assumptions (for example, fewer support emails is better) could be keeping us from achieving the results that we want.

These assumptions aren’t limited to support. Entrepreneurs who learn from studying others make assumptions about *every *aspect of business, from marketing to hiring to development to sales.

Often, testing those assumptions is cheap and easy, and at least in this case, it certainly paid off.