The company’s recent PR disaster can teach us all how to better protect our businesses.

If you love watching corporate crises turn into PR trainwrecks, then you’re having an amazing 2017.

Between Pepsi, Uber and Cosmo, the year was already shaping up to be a solid source of crisis communications case studies.

But then… enter United Airlines.

To put it lightly, they dug themselves a hole that’s going to take years to get the world to forget… if that ever even happens.

This post isn’t intended to make light of the horrific and inexcusable treatment of a United customer.

It is intended to draw meaningful takeaways from the event, and from the crisis communications mistakes that followed, so that you can prevent crises in your own business, and better prepare yourself for when a crisis does occur.

In case you’re not familiar with the details of the case, here’s a brief synopsis:

On April 9th, United Airlines had fully boarded flight 3411, scheduled to fly from Chicago to Louisville.

After boarding was complete, it turned out that United needed to send four crewmembers to Louisville so that they could work on a flight the next day.

Because flight 3411 was fully booked, the United gate agents began to offer vouchers to passengers who would volunteer to get off of the plane and take another flight.

They offered $1,000 in compensation, a hotel room, and a ticket for a flight the following day.

When they didn’t have enough passengers accept the offer, they asked four passengers to get off of the plane so that the crew could fly.

One customer refused to leave the plane, and the United crew called Chicago Aviation Police, who forcefully removed the passenger, bloodying and injuring him in the process. 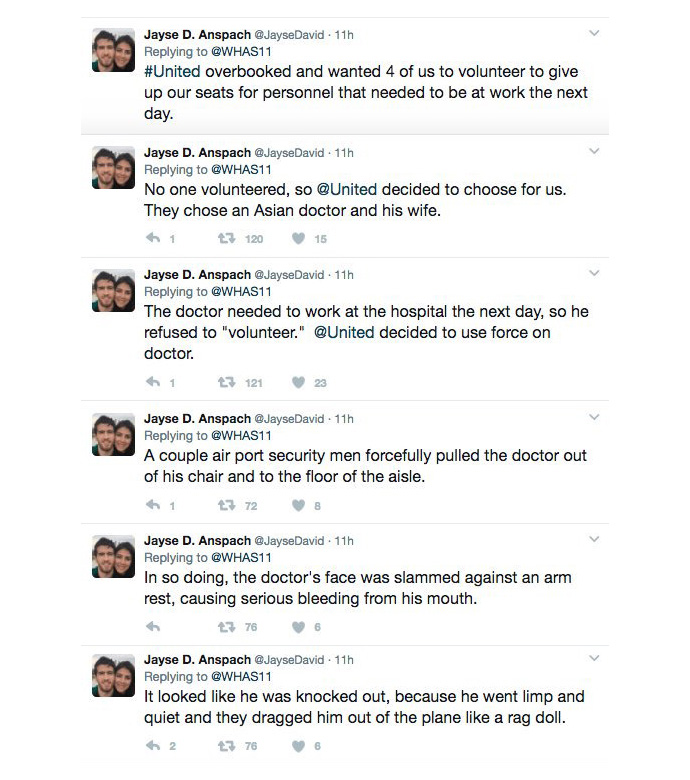 Other users posted video of the incident, which is available with a quick Google search, but be warned that it’s disturbing to watch.

It didn’t take long after this for the internet to erupt in rage and concern for the doctor.

United’s first response left quite a lot to be desired:

Unfortunately, it got even worse after that.

The next day, the airline’s CEO, Oscar Munoz, sent this letter to the company’s employees: 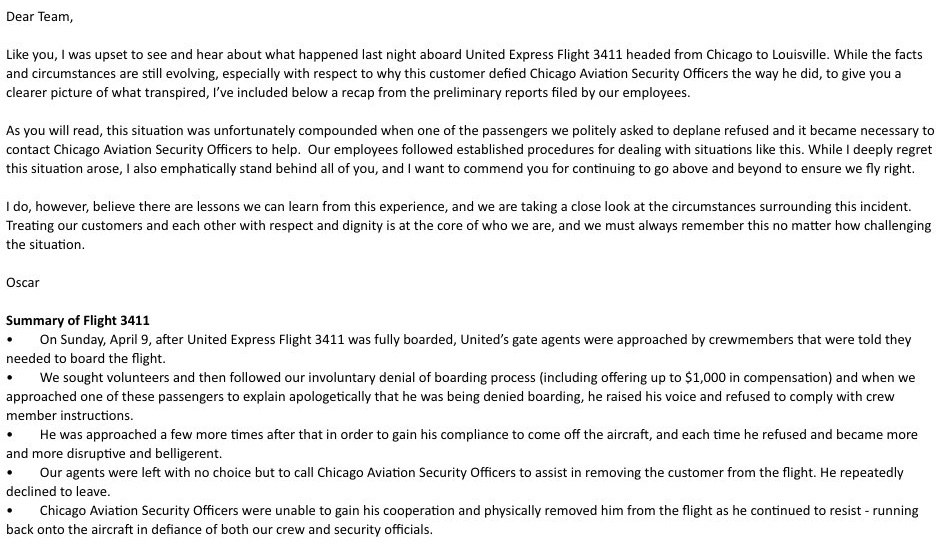 The market didn’t take kindly to this tone-deaf response, that entirely ignored the brutal experience of the passenger.

It wasn’t until two days later⁠—after United lost a reported $1 billion in value due to their stock tanking⁠—that the CEO finally released a seemingly heartfelt apology. 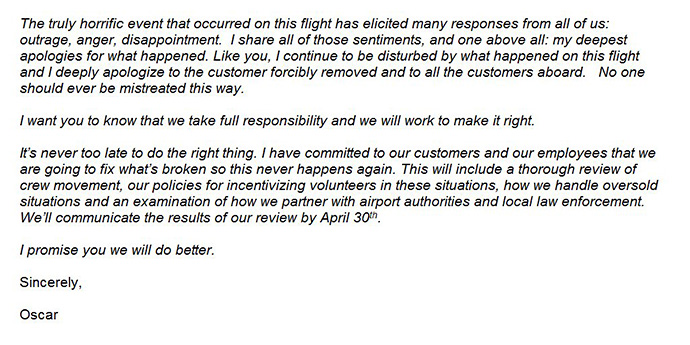 Over the long term, this incident is going to cost United far more than the $1,000 in compensation they originally offered.

It will cost them far more than the millions that the passenger was likely paid in their recent legal settlement.

And in fact, it will likely cost them more⁠—in bad press, lost bookings and shattered customer loyalty⁠—than the hundreds of millions of market cap they lost (some of which they’ve gained back since the incident).

In fairness to United, they’ve recently announced a number of changes that begin to point the company in the right direction. But this happened within the last few days (in fact, I had to add this note after the post was written), far later than the initial mishandling of the situation, and only time will tell how long it will take them to reshape their image.

Your business likely isn’t as big as United, but don’t underestimate the risk of a bad PR crisis.

5 Things Your Business Should Learn From United’s Experience

Let’s discuss exactly what United did wrong, and what we can learn from it to protect our businesses.

This entire incident could have been avoided with one thing: more empowered frontline employees.

There were no takers at the $1,000 compensation offer, and the company’s policy ensured that the agent couldn’t make a higher offer.

Of course, today, $1,500 looks dirt cheap compared to the fallout from the incident. Which is why, last week, United announced that they were increasing the maximum compensation for involuntary “bumping” to $10,000.

Most policies for customer service employees are made to protect the business from unnecessary costs.

But it’s important not to lose sight of the fact that by giving your employees the power to make customers happy, you’re protecting the business from far, far worse.

At Ritz-Carlton Hotels, each employee is given a $2,000 budget to make any single guest happy. That budget is PER GUEST.

How’s that for empowerment?

Now, a $2,000 allowance to make things right for a guest sounds like a lot. 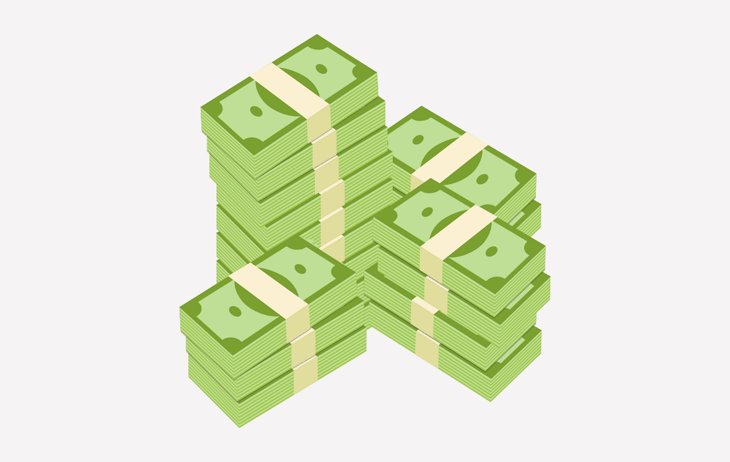 Now, here’s the thing: that amount is very rarely used.

We entrust every single Ritz-Carlton staff member, without approval from their general manager, to spend up to $2,000 on a guest. And that’s not per year. It’s per incident. When you say up to $2,000, suddenly somebody says, wow, this isn’t just about rebating a movie because your room was late, this is a really meaningful amount. It doesn’t get used much, but it displays a deep trust in our staff’s judgment. Frankly, they could go over that amount, with the general manager’s permission.

The concept is to do something, to create an absolutely wonderful stay for a guest. Significantly, there is no assumption that it’s because there is a problem. It could be that someone finds out it’s a guest’s birthday, and the next thing you know there’s champagne and cake in the room. A lot of the stuff that crosses my desk is not that they overcame a problem but that they used their $2,000 to create an outstanding experience.

There are stories about hiring a carpenter to build a shoe tree for a guest; a laundry manager who couldn’t get the stain out of a dress after trying twice flying up from Puerto Rico to New York to return the dress personally; or when in Dubai a waiter overheard a gentleman musing with his wife, who was in a wheelchair, that it was a shame he couldn’t get her down to the beach. The waiter told maintenance, who passed word, and the next afternoon there was a wooden walkway down the beach to a tent that was set up for them to have dinner in. That’s not out of the ordinary, and the general manager didn’t know about it until it was built.

2) Train Your Employees to Deal With Difficult Situations

When Dr. Dao refused to get off of the airplane, the United gate agents were at a loss for what to do.

So they called the airport police.

Let’s make sure that this sinks in: United called the police to enforce the airline’s will on a paying customer. They essentially brought the police in as tier-two customer support.

Rather than keep trying to de-escalate the situation, employing other techniques, United customer service agents called the police, who ended up violently dragging the passenger off of the plane.

You need to ensure that your employees know how to handle challenging customer situations, whether it’s an angry customer or simply a rude one.

And if you do need to enforce a policy, do it with empathy, not a sledgehammer.

If you’re cutting off service when a customer is a few days late on a bill (for the first time), or locking customers out of accounts when their credit card bounces, try putting yourself in the customer’s shoes and adopting a more thoughtful approach.

3) Have a Plan for the Inevitable Crisis

Your business will encounter a crisis.

It might not be a dragged-a-paying-customer-through-the-aisle crisis, but at some point, you’ll screw up. Or you’ll get hacked. Or your servers will go down. Or a vendor issue will impact your own customers’ experience.

The worst move in crisis communications is not having a plan.

4) When a Crisis Happens, Address the Actual Crisis

Perhaps the worst mistake United made on the communications front is trying to run away from this crisis.

It was quickly clear to anyone reading the news that this was going to be big.

And yet, rather than address the issue, United’s CEO sidestepped the reality of the horrible situation by glossing over what happened to the passenger in his first apology.

I apologize for having to re-accommodate these customers.

Not surprisingly, “re-accommodate” instantly became the target of thousands of memes and angry posts attacking the airline for whitewashing what happened.

Beyond that, the airline’s statements directed blame away from themselves; first trying to emphasize that the issue happened on a United Express flight (rather than a “mainline” United flight), and then blaming the police for their actions (despite the fact that it was United who called the police in the first place).

When the inevitable crisis happens, address it head-on, rather than looking like you’re trying to sweep it under the rug.

5) If it Happens on Your Watch, it’s Your Fault

Another important takeaway from United’s efforts to shift the blame away from themselves is that if something happens to your customer, on your watch, it’s your fault.

This is true, at least, in the eyes of the customer.

The customer doesn’t care that you pay a third party to process emails, or keep your server running, or ship them a product.

They paid you to solve a problem for them. And when a third party screws up, it’s your responsibility to make it right for the customer (and deal with the third party on your own).

Your first job, regardless of whose fault you see it as, is to apologize to the customer.

Apologies aren’t about taking blame for the crisis. Apologies are about empathy, about showing that you understand how the customer feels, and about feeling genuinely sorry that they feel that way, regardless of who caused it.

Beverly Engel, author of The Power of Apology, explains why apologies can be so powerful in crisis interactions:

In a world where companies love to play the blame game to protect themselves, a simple apology can go a long way in starting your crisis communications campaign off right.

Hope for the Best, Prepare for the Worst

I hope that your business never undergoes a true crisis.

I certainly hope that it never sees anything remotely as serious as what happened with United.

But chances are, something will go wrong at some point.

I hope that this post has given you some ideas for both preventing the crisis through better training and empowerment, and for preparing for it through smart crisis planning.