One of the best ways to connect with prospects is by using stories from existing customers. Here’s how we do that…

It’s frustrating, infuriating and agonizing at the same time.

Every startup with a big competitor knows this battle: when you’re the little guy, you’re not the “safe” choice.

You’re the risk. You’re the one that has to scrap harder to get picked.

That saying, “nobody ever got fired for hiring IBM”?

In our world, nobody ever got fired for signing up for Zendesk.

And if they choose Zendesk, it’s often because there are tens of thousands of others just like them using Zendesk, too. It sure makes the decision a lot easier to justify.

We can’t fault prospects for that: I’ll almost always take the safe choice, too.

The challenge, then, is: how does the scrappy, unproven startup become more of a sure thing?

While we’re always learning and we still have a long way to go, we’ve gotten pretty good at making that case over the last couple of years, and one of the things that’s helped us the most is using testimonials to help prospects overcome those “uncertainty” objections.

The Power of Testimonials

Marketers call it social proof: when we see lots of others doing something, we assume that that’s the correct behavior.

There have been dozens of studies on social proof. This is one of my favorites, in which a psychologist placed people standing on a sidewalk staring up at a building, and observed hundreds of passerby stopping to stare up when they saw his actors, too.

But social proof is only one side of it.

When we see a product that looks like it works well, we sometimes think: great, but it probably won’t work for me because I’m (insert any unique trait or condition here).

We build objections to any marketing pitch we see, and testimonials help to overcome those by showing us that yes, this product does work for people just like us.

Takeaway: The psychology of testimonials is deep and powerful, and lies on two important pillars: social proof and overcoming the objection that your product won’t work for a particular customer.

What Makes a Good Testimonial?

At Groove, we’ve found that good testimonials increase conversions by up to 15% on our homepage, guest post landing pages and email marketing.

Hint: it’s not a fluffy, gushing “Groove is amazing and changed my life” statement. It’s much more nuanced than that.

I encourage everyone to read Sean D’Souza’s two-part Copyblogger series on The Secret Life of Testimonials (Part One and Part Two), but what we’ve found is that the best-testing testimonials are specific about who the testimonial writer is, and what problem Groove solved for them. 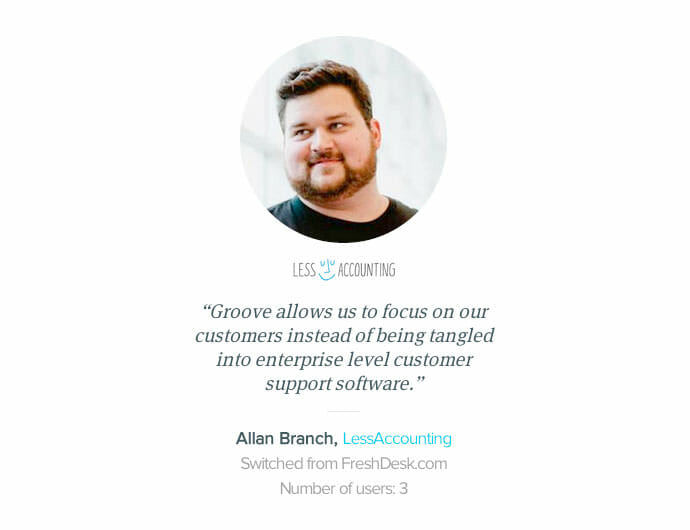 The first part helps the reader put themselves in the shoes of the testimonial writer. As a SaaS founder, I’m a lot more likely to relate, for example, to Allan Branch, another SaaS founder, than the anonymous “John S., Boston, MA” that I see offering up testimonials all over the web.

The second part, specificity about a problem, demonstrates to the reader not just that your product is generally good (that’s not enough), but that you can solve their problem.

In the example above, one of the most pressing problems we’ve found in our customer development is that enterprise help desk users feel bogged down by the complexity of the software, so we need to make sure we hit that pain point in our testimonials.

Takeaway: Good testimonials aren’t fluffy; they communicate very specifically the type of person the testimonial writer is and the type of problem they’ve been able to overcome. This helps readers put themselves in the storyteller’s shoes.

How We Get Good Testimonials

Unfortunately, it’s not as simple as saying “could you please provide a testimonial?”

Sure, that’ll get you a testimonial, but it’ll probably be a weak, generic and canned-sounding blurb that won’t help you any more than not having testimonials.

But we’ve found that while it’s not that simple, it is fairly straightforward to get good testimonials by following a few basic approaches.

Note: in all of the examples below, we never post a testimonial without first asking the customer for permission.

Every single person who signs up for Groove gets this email: 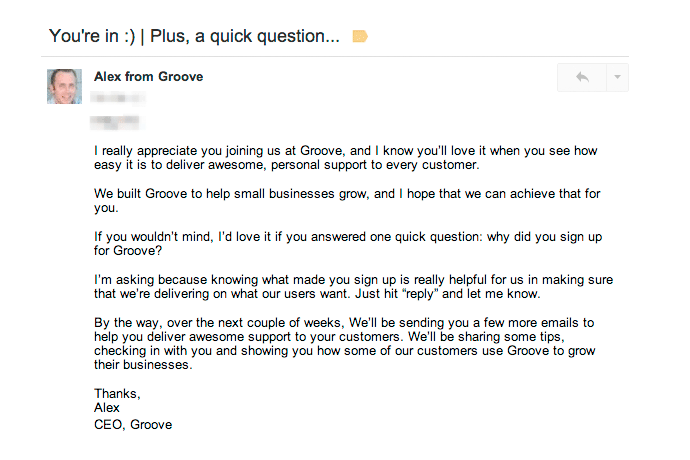 It’s not just amazingly valuable for collecting qualitative data about the “conversion triggers” that worked in getting people to sign up, but it gives us profound insight into the objections and obstacles people had to overcome to make the choice to sign up for Groove.

(Alex note: the person who sent that email above has now been a customer for six months).

Often we’ll go back in a few weeks or months and follow up with customers to see how they’re doing. Using those stories (customers who went from big challenges to being successful using Groove) in our testimonials helps us connect deeply with prospects going through the same emotions.

**Takeaway: **Good testimonials don’t just capture the end result. They capture the struggles and objections at the beginning, too.

If you’ve been following the blog, you know that we spend a lot of time talking to our customers.

Mo, our head of support, does it for 8+ hours per day. The rest of our team engages with customers, too. I devote at least a quarter of my time to talking to Groove customers.

(In fact, one of my goals for the next few months is to talk to every single one of our customers about their experiences and how we can improve.)

And while the goal of our conversations is always to help the customer do better with Groove, we’ve also learned to listen for the underlying stories they share about their experiences.

It’s usually in these natural conversations — and not the canned requests for testimonials — that we get the best, most compelling customer stories.

Once the conversation is over or the support issue is resolved, we’ll go back and ask the customer if we can share their story.

Takeaway: There are a lot of important reasons to always be talking with your customers. Being able to spot and extract powerful testimonials is just one of them.

Sometimes, customers don’t necessarily need to talk to you; they’re doing just fine on their own.

And if they’re busy, it can be hard to get them on the phone with you.

But if we know someone is succeeding with Groove and that their story might make a great testimonial, we’ll send them an email that looks like this: 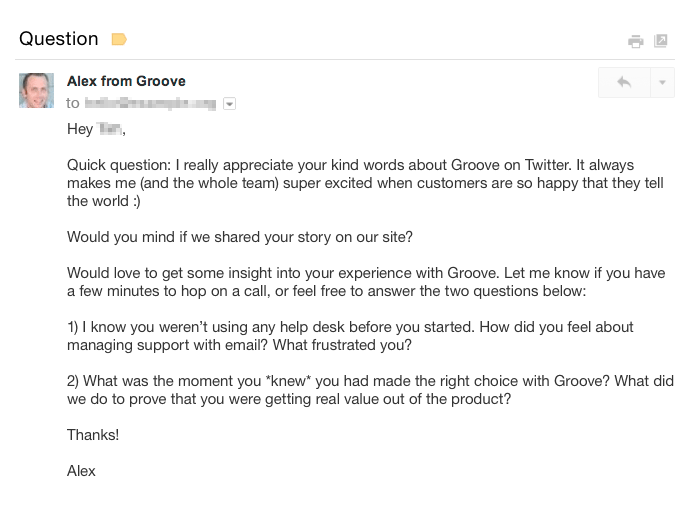 Notice how we don’t just ask for a testimonial, but walk them through the steps required to hit the most important traits of a great testimonial.

The script above is yours to use as you’d like; I hope it nets you some powerful stories.

Takeaway: The way you ask for a testimonial can mean the difference between a crappy testimonial and an amazing one. It takes a bit more work, but it’s worth doing right.

Testimonials can be a powerful tool, and if you’re not already using them, I hope this post inspires you to test them in your marketing.

If you are using them, but your testimonials aren’t as good as they could be — this is almost always the case, as we’re also always working to improve our customer stories — I hope you’ll revisit them now.

Feel free to use the scripts and strategies above to tell better stories, connect more deeply with your prospects and improve your conversions.