We’re halfway through the 12-month startup growth plan we released in June of 2014. Here’s how things are going…

Six months ago, we made Groove’s one-year growth strategy public.

We opened up about our approach to marketing, our top-performing channels and the tests and tactics we planned to execute on over the next year.

But in business, plans are rarely, if ever, set in stone. The best plans are fluid and adapt to results and feedback throughout the process. A 12-month plan shouldn’t be evaluated in 12 months; it should be reviewed and adjusted far more frequently to make sure you’re going in the right direction.

So while we’ve been tweaking and adjusting as we’ve gone, we’re halfway along now, which I think is a good milestone to step back and truly reflect on our big-picture progress.

Just like our original strategy document, this was an internal process that I’m sharing because I think it’ll be valuable to other businesses working to execute on their own plans.

I hope you find it helpful.

A Bit of Background

Our strategy was built on three pillars — our key objectives — for the company:

The Three Pillars of Our Growth Strategy

1) Leadership in the SMB Market

We’ve gotten here by serving small businesses and entrepreneurs. Unlike some of our competitors, we’re not going to move upmarket. Our product, our blog and our other efforts have all helped SMB’s grow, and we’re going to keep doing that. As you’ll see below, we have plans to increase — by a huge margin — the amount of value we’re delivering to our community. Our mission is to become the preeminent resource for small businesses when it comes to support, growth and business strategy.

As we’ve seen many times in the SaaS space, a good product isn’t enough for long-term growth. We need to build a lasting brand that people love to do business with. We’ve begun to do that with the 100K blog, but there’s a lot of work left to be done.

There’s no doubt that collecting, analyzing and using the right data can help us make smarter business decisions about our time, our budget and our roadmap. We’ve seen it with our own successes. We need to do a better job of this. We need to get to a point where we can treat our efforts — marketing channels, product features, team hours and focus — as levers; when we push or pull one, we know what result to expect. We can’t depend on luck; this will be the only way to make our growth systematic.

Everything we included in our plan had to pass a simple test: does it move us closer to one of our three objectives?

Below, I’ll review what we’ve done, what’s worked, what hasn’t worked, and how our plans have changed.

In June, we identified four key concerns and challenges that stood in our way. Here’s where we stand on those today:

Being a remote team, we’ve had our own challenges with collaboration and growth. We’ve had to figure out how to overcome them, but doing so prepared us for our next hires, which joined us from halfway around the world.

In the last six months, we’ve hired two new developers (Matt, who lives in Berlin, and Ryan from Cape Town, South Africa), and Serg, our St. Petersburg-based front-end developer who had been with us for several months, joined us full-time. 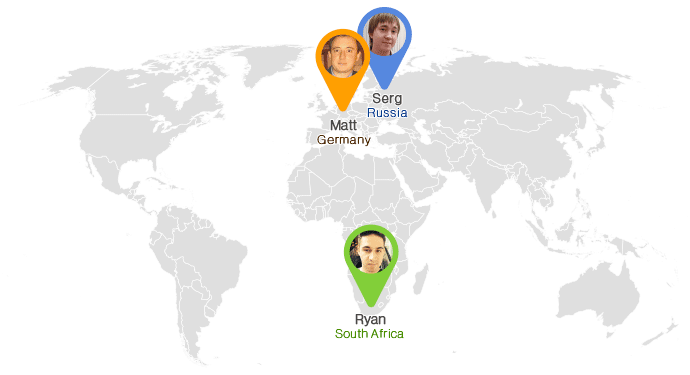 Six months ago, I had some concerns that we weren’t moving fast enough on the development front.

To address that, we implemented systems for tracking and handling bugs that help us prioritize better and lose less time from being disorganized. And of course, having three more full-time developers helped us in a big way.

I’ve been giving a lot of thought to Gary Vaynerchuk’s approach to hiring ahead of your needs. Skip to 3:44 in the video below to see what I mean, but the short version is: as long as you can financially swing it, always be hiring for people who will help you down the line, even if you don’t need them right now.

This is one of the lessons I hope to apply more over the next six months to help us meet our goals even faster.

Our infrastructure had been weighed down by technical debt for some time. It caused user experience issues, bugs and left us exposed for catastrophic meltdowns.

Much of the first half of last year was dedicated to resolving those issues, and by the time we released our 12-month plan, the app was sound and many of them were gone. However, some still lingered, and that was unacceptable.

We’ve done well, though, in tackling them over time. I’m happy with the performance and stability of Groove, but keeping it stable will always be a priority.

How We’re Doing on the Execution of Our Growth Strategy

We won’t hit 5,000 at that rate, but our new signups per month are steadily increasing, so 5,000 is well within reach as long as we don’t slow down.

Here’s how our various growth efforts are going:

In September, we launched our new customer service blog, which quickly grew to more than 10,000 subscribers (some of whom opted in from this blog’s list). This has been huge for us, as the readers of the support blog convert slightly faster — and at a slightly higher rate — than readers of this blog. It’s an addition to our content offering that I’m really excited about.

We also hit a fork in the road with this blog when we hit the $100K MRR milestone we started out aiming for. The milestone gave us the opportunity to make some changes to the blog, including resetting our sights on a new, bigger ($500K) milestone and introducing guest content. Plus, we’re launching an interview series; our first interview post, with Hiten Shah, is in editing now, and I can’t wait to release it. I think it’ll be incredibly valuable for any entrepreneur.

While we’ve made a lot of progress in content, we also have big goals, including doubling our subscriber base to 60,000 this year.

To accomplish that, we’ve got a few things in the works:

In fact, we’re starting today, with one of our most-requested content pieces ever: a collection of every win, fail and lesson we learned on our journey from $0 to $100,000 in monthly revenue.

This is one area where things haven’t gone quite as planned.

After a lot of thought and internal discussion, in October we deleted our Facebook page. It simply wasn’t a high-ROI channel for us, and we didn’t want to waste any more of our resources — resources that could be going toward things like blogging, that we already know to work — on it.

With that said, we’re not abandoning social media. We’re working now on recalibrating where we’re going with social, and plan to put together a new, more focused strategy in the coming months.

While from a goal-achieving standpoint, this part of our strategy has been a fail, I think it’s more valuable to be brutally honest with ourselves and admit that than it is to pretend things are great. Social has been a weak point for us, and we need to get better.

[Alex note: to date, we’ve largely ignored SEO. While it’ll never change the way we write, it will help us figure out the best ways to add value in ways that more people are looking for.]

Since then, we’ve made a far more conscious effort to be mindful of SEO. While I admit I was once scared of it — thinking of it as a spammy marketing tactic — I’ve learned a lot about how ethical SEO can actually help you write more valuable and more interesting content.

Many of those lessons are in this post: How We Got Over Our Fear of SEO and Improved Conversions 20% in the Process

We’ve gone from not even considering SEO to ranking high for many of the search terms we’ve tried to optimize for, so SEO has been a win for us. However, we’re still very early along in the process here, and we’re working hard to get more sophisticated and smart about how we approach SEO.

If we’ve failed (or at least not yet succeeded) at anything thus far in the execution of our plan, it’s social media and referrals. We’ve failed to do anything at all on this front. This remains high on our list of development priorities, and I’m itching to attack it in the next few weeks.

With an expanded development team, we’ve been able to aggressively build partner integrations and grow the footprint of Groove. In the past six months, we’ve integrated with Slack, Olark and SnapEngage, all of which have been valuable partnerships for us.

We have more than ten integration releases planned for Q1 of this year, and while I can’t say anything just yet, we started beta testing an awesome new integration today — our biggest one yet — that’ll open the door for Groove users to enhance their help desks in a massive way.

In addition to shoring up the performance of the app and building new partner integrations, we’ve hit a lot of our product improvement goals over the last six months:

These are just a few of the ways we’ve made Groove better. As any tech team can attest to, this is an area where the work is never done.

Another area that I’m very satisfied with our progress on.

Looking back, we’ve done really well at some of the things we set out to do.

We’ve also completely failed at some of them.

But that doesn’t upset or alarm me. For one thing, the health of the business, overall, has benefited tremendously from us setting these goals and using our strategy roadmap as a guideline.

Reflecting like this has helped us plan better for the next six months, and after this exercise, we know squarely where our priorities lie.

Just as I hope our post on growth strategy helped you create a plan of your own, I hope that no matter what your strategy is, this post serves as a reminder to step back, assess and recalibrate your planning and execution as you go.

It was a valuable exercise for us, and I think it can help anyone as they look forward to a successful 2015.