It was every startups’ worst nightmare.

The lump in my throat made it hard to breathe, and the silence on the other end of the line wasn’t helping me feel any better.

“We’re dying,” I repeated. “If we don’t turn things around fast, there won’t be a Groove.”

I was talking to an old mentor of mine; a seasoned entrepreneur who had made his fortune outside of tech, but whose expertise had helped me through a lot of struggles in my own journey as a founder.

I wasn’t sure what I wanted from him.

Maybe I wanted him to say “no problem, Alex, I’ll make an investment in Groove to give you guys a chance to figure things out.”

Maybe I wanted him to hand me the solution on a silver platter, telling me “here’s exactly what you should do.”

Or maybe I just wanted him to tell me that “it’ll be fine. I was there, and you’ll get out of this.”

But for the first time that I could ever remember, he came up short.

He had nothing for me.

I was lost. And so was our team.

And we didn’t have much time.

Running Out of Time

In those days, I hated Fridays.

You’d think that Fridays would be a welcome break. No matter how bad the week was, Friday means that I get two days off to recover, right?

Here’s the thing: in those days, Groove was struggling to stay alive.

We simply weren’t making enough to pay our bills, let alone invest in improving the business.

We had spent more than six months building a customer service software product that, frankly, didn’t work. We committed the most cardinal sin of product development: building the product that we assumed people wanted to use, rather than the one that our market told us they wanted to use.

We didn’t ask many questions of our market in those days, and our product showed that.

It was clunky, complicated and didn’t address the right problems.

And so we spent another six months re-building it from the ground up, this time based entirely on customer development calls with anyone who would agree to talk to me.

The next version was much better. Not nearly as good as it is today, but it at least began to approach something that our market could actually get value out of.

It was a huge win!

So we released it, sending emails to our former users and a few other contacts who had helped us out in the past.

A couple of signups to kick the tires, a handful of visitors to the site, but nothing that remotely resembled anything close to traction.

We had burned bridges with much of our list through our earlier failed product, and we had burned through the overwhelming majority of our cash in the bank.

Despite finally having a product that we could be proud of, each week, we were moving closer and closer to being a “remember them?” startup story.

So why did I hate Fridays?

Friday, you see, was the day that our metrics provider would send a weekly summary of our numbers for that week.

Friday was the day, every single week, that I had to face the fact that we were in a death spiral.

It’s important to understand that we weren’t just passively sitting there and letting the company fail.

Every day, we were reaching out to trade publications, posting to forums and thinking hard about low-cost channels where we could actually find customers.

At the time, “content marketing” was becoming a hot digital channel.

Companies like HubSpot were just beginning to take off, and it brought a level of attention to content marketing that had never existed before.

Of course, we thought. It’s so simple.

HubSpot, and others like them, would publish blog posts, distribute them via email and social media, and they’d grow!

There’s no reason that we can’t do that.

And so we did.

We threw together some list posts around a few different themes, built a cheap Tumblr blog, and put them out into the world. 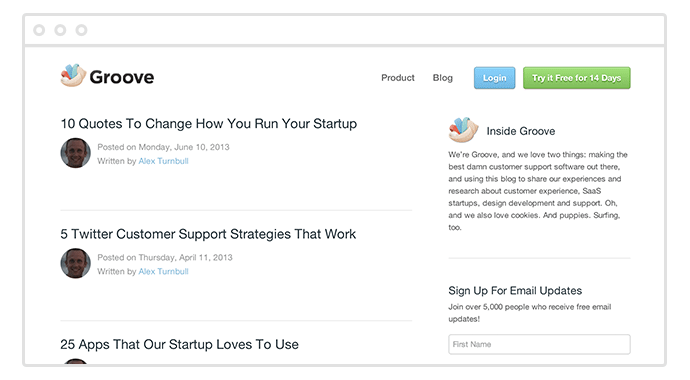 We were already used to the sound of crickets.

We had tried dozens of tactics, and all of them produced nothing but silence.

But when this failed, it hurt.

We knew that content marketing was a long game, but we had hoped for something; at least a small green light to indicate to us that this might work.

Instead, our traffic didn’t budge: 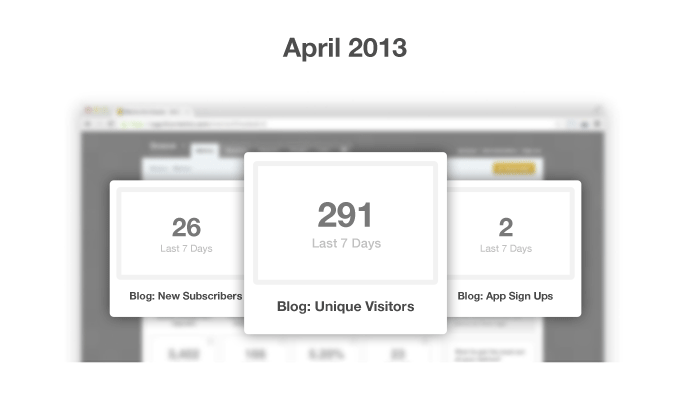 It just seemed so easy on the surface.

How could HubSpot, Copyblogger, Unbounce and the rest of the content marketing “winners” get real growth from content, while we did—what we thought was—the same thing and got nothing?

That’s when we decided to find the answer to that exact question.

If we wanted to succeed with content, we’d have to learn from those who already had.

So that’s what we decided to do: send emails to every content marketer that we respected, and see if they’d be willing to chat.

Unsurprisingly, most of our emails went ignored.

But email outreach is a numbers game, and of the 40+ emails that we sent, a handful of successful content marketers agreed to talk.

From the very first call, we realized that there was an entire world beneath the surface of content marketing strategy that we had been missing the entire time.

They asked questions that challenged us and made us think about our strategy in ways that we, embarrassingly, had completely neglected before:

It quickly became clear that we needed to do things differently.

And so, we did one of the scariest things imaginable for a startup about to run out of money: we stopped everything, and we went into a hole to regroup.

What we did in those next two months changed the story of our company forever.

Today, more than 250,000 people read our content each month, more than 5,000 customers trust us with their business, and we’re generating nearly $5 million in annual recurring revenue.

All of that is thanks to the strategies we discovered and put into practice in those early days.

And on Monday, We’re Sharing Exactly How We Did It

In a few days, we’re going to pull back the curtain and share the three key strategies that we used to go from running out of money to running a five million dollar business.