Every Friday, we’re answering your questions about business, startups, customer success and more.

This week’s question is:

“Terrified” is the perfect word for how I felt when we made our first “stretch” hires, too.

But over the years, I’ve learned a lot about hiring great people, both from making mistakes and from getting some things right.

1) At First, Hire for Immediate Needs Only.

When we first started, Groove needed to accomplish two things: make a product, and get it into people’s hands.

For better or worse, we weren’t too worried about accounting, legal filings, operations or HR. Yet.

So we focused on hiring people who could help us accomplish our two main goals.

I wasn’t looking for anyone that could be trained to do a great job tomorrow (more on how that’s changed below), but instead I wanted people who had the skills and experience to get us closer to where we wanted to go today.

At the time, we were working on transitioning our development from MojoTech, the agency who built our first iteration. We needed developers who could deeply understand the existing codebase and build the features we wanted to build immediately.

So my first hire was Edmund, a full-stack developer, and a bit later, Chris, a back-end engineer.

Not long after that, I hired Jordan, another full-stack developer.

While Edmund and Chris had to take off for personal reasons, Jordan is still part of our team today.

Takeaway: When you’re starting out, don’t worry about who you’ll need in six months or a year. Focus on getting the people who can create progress today.

2) Once Tomorrow Is Secure, Hire for the Future.

Early on, we didn’t really have the luxury of planning for next month, let alone next year.

But when we turned a corner and hit Product/Market Fit, Groove began to grow fast. We were hitting the milestones on our product roadmap, and building at a good pace.

We had the runway to plan for the future, and so our hiring changed a bit to reflect that.

In general, the approach we’ve taken is this: it’s time to hire for a position when the pain of not having that person on your team is bigger than the cost of adding them.

Here’s an example: In our first year, I was pounding the pavement, selling Groove to anyone who would listen. Over time, the need for a customer support person became more and more pressing. I couldn’t continue doing all of the support and marketing at the same time.

That’s when I hired Adam, one of my childhood best friends, to join us as our Head of Customer Success.

Takeaway: After you turn a corner and have the benefit of being able to think months⁠—and years⁠—ahead, that’s when you should start to make the hires that will help you achieve the goals you’re setting out.

3) Turnover Will Happen. It Won’t Be as Bad as You Think.

Several months ago, Adam left Groove to return to the finance world.

It was a smart move; he has a new baby, and needed more stability and income than a startup could provide.

When he told me he was leaving, I couldn’t help but panic.

It’s not that I expected him to stay forever; in fact, early on, we had talked about this being a temporary arrangement while we got the company off of the ground.

But over two years of working together, we⁠—not I⁠—had become Groove.

When your company is two, three, four, five or six people⁠—people who battle in the trenches together every single day⁠—it can be hard to envision the business without those team members. Thinking about losing them can be a tough shock to the system.

Plus, there’s always the fear: what will people think? Our customers talk to Adam every day, are they going to be upset that he’s gone? Will everyone think we’re in trouble because our first employee is leaving?

As a founder with many fears, it can be paralyzing.

But, as with most things, it never ends up being as bad as you think it’ll be. 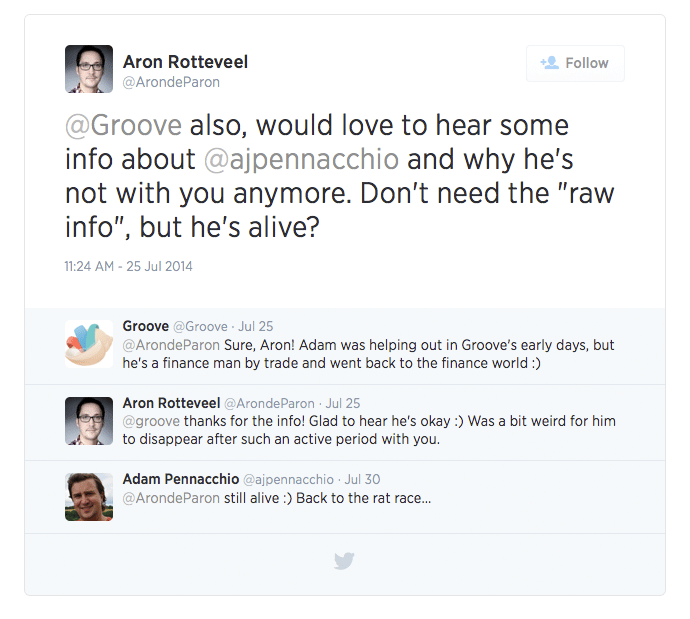 (For anyone interested, Adam is still one of my best friends.)

Takeaway: Losing a team member is scary for a startup, but it won’t end up being nearly as bad as you fear. Try to make the most of their final weeks and have them help you train their replacement. Either way, life⁠—and business⁠—goes on.

Not every need requires a full-time effort to fill.

There’s a lot of resistance among founders I’ve talked to when it comes to hiring part-time help. They say things like “we want someone who’s going to be part of the team,” and end up hiring full-time employees to fill part-time needs.

It doesn’t have to be all-or-nothing.

Along our journey, I’ve supplemented the Groove team with part time help, and it’s allowed us to stay lean as we grow. In fact, we still use a part-time designer for the header art on this blog.

It’s also opened up big opportunities for us: sometimes, the people you want on your team aren’t necessarily available for a full-time gig.

Len, our head of marketing, was consulting for a number of companies when he first joined us to work part-time with copy and messaging. Over time, he’s helped us with content strategy, messaging and copy for our site redesign. It wasn’t until two years later that the stars aligned and he wrapped up his other projects to come join our team full-time.

Serg, our front-end developer, started out working just a few hours per week, helping us to code our blog posts. Now, several years later, he’s a big part of the team, coding everything from our marketing site to our app UI.

Takeaway: Don’t be afraid to lean on part-time help. If you don’t need a full-time employee, it can save you money. If you are looking for a full-time solution, it can plug the gap while you search. And often, it can end up becoming a full-time arrangement in the future.

5) Reduce the Risk for Everyone.

A bad hire is always costly. For a startup, it can be devastating.

It’s a mistake that’s burned me in the past, and I was determined not to let it happen with Groove.

That’s why we use the trial-to-hire method: every new employee joins us for a “trial project”⁠—something they can do during nights and weekends while keeping their current job⁠—of 2-4 weeks. After the project is done⁠—although usually, it’s apparent much sooner⁠—we can evaluate whether we’re the best fit for each other. 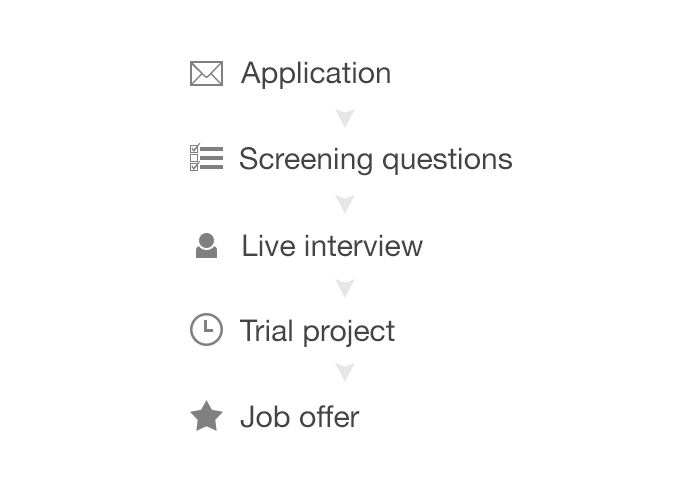 This approach has helped us slowly but effectively build a team that works⁠—and fits⁠—well together.

Takeaway: Hiring someone is a big investment, and can be risky for both parties. Interviews can only tell you so much. Use trials to make sure that every new team member fits in well.

And while I don’t necessarily agree with the first part (we hire pretty carefully and methodically), I know that I could use some help internalizing the second part.

You hire people, and it doesn’t work out. Maybe they’re not a great fit for the team. Maybe their strengths aren’t what you thought they would be. Maybe you misjudged the need for a full-time person in their position.

Whatever it is, these mistakes can be very costly.

Here’s the problem: a person is not an app. Regardless of whether you have a “pay-as-you-go” contract with them or not, cutting ties with and employee is a much more difficult and emotional act than canceling an app subscription.

In my entire career, I’ve had to fire dozens of people. People with families and responsibilities. It’s devastating, and over the years, it hasn’t gotten any easier.

If anything, it’s gotten harder, as I get angry with myself for continuing to make hiring mistakes from time to time, costing people their jobs.

But at the end of the day, keeping an employee who isn’t a good fit for the team can be crippling.

It brings down the whole team, and ties up cash you could be using for better investments in your business.

It’s tempting to try and make it work; to brainstorm and try to figure out ways to make the fit better.

But I’ve never been good enough to do that successfully.

One of the things I’ve learned⁠—and worked on a lot over the past year⁠—is being much faster to spot whether a new team member is a good fit or not.

It takes some unpleasant brutal honesty with yourself, but in the long run, it’s critical to your business’ future.

Takeaway: Firing people is hard. Really hard. But if you want to hire and manage a successful team, you need to learn how to determine whether or not someone is going to be a strong part of your team’s makeup in the long term, and if the answer is no, you need to take action as soon as you can.