Here’s a tip: if you want to sell anything to a SaaS company, just tell them that it increases conversion rates.

It’s sad but true; “increases conversions” has become the cliche rallying cry of hundreds of products around the web.

It sounds nice, but in many cases, it’s totally meaningless.

Let’s say a product failed to help hundreds of businesses, but somehow increased conversions for a single site. That product now has enough proof to claim that it increases conversions.

Claims like that need to be taken with a grain of salt, just like the “helps lower cholesterol” banner you find on sugary cereals in the supermarket. 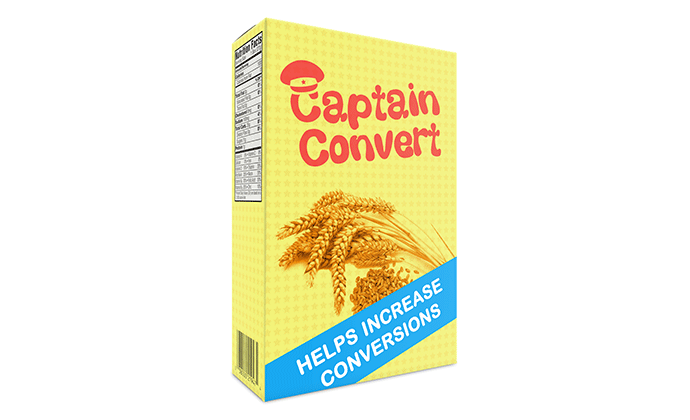 To say that something increases conversions is a nice soundbite, to be sure. But that doesn’t make it usefully true for all of us.

So when I set out to determine whether good customer service does, in fact, increase conversions, I did so cautiously. I didn’t want to make bold claims that wouldn’t, ultimately, be helpful.

Did I find a definitive answer? You’ll need to read the post and judge for yourself.

But I did find some fascinating evidence to suggest that customer service and marketing are far more related than most people might think.

My hope is that these examples change the way you look at support and the impact that it can have on your marketing efforts.

More than 1,500 companies shared their conversion data, in the hopes of creating benchmarks that would help the SaaS community take a more informed approach to conversion rate optimization.

One of the questions that Groove asked was:

Which channel did you put the most focus on in 2013?

The choices included referrals, email marketing, content marketing, customer service and a handful of others.

And while customer service was far from being a top answer (only 7% of the respondents selected it), there was an interesting correlation in the data:

Companies who said that their biggest focus was on customer service reported, on average, 11% higher overall conversion rates on their websites. 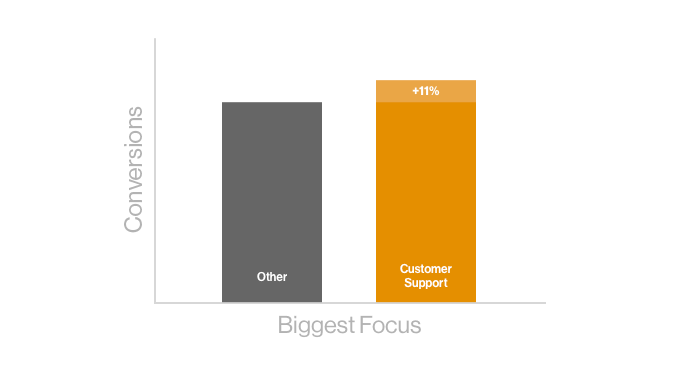 An interesting data point, but is it enough to conclude that focusing on support equals higher conversions?

Probably not on its own.

Let’s look at some more data…

Proposify is a SaaS company that builds proposal software for agencies.

As the company began to grow, Kyle Racki, Proposify’s CEO, decided to invest in their customer service. He signed up for help desk software (disclaimer: Kyle is a Groove customer, but you can do this with a number of different tools) and began to read everything he could about how to deliver better support.

Customers began to take notice, and the company’s growth began to accelerate. For the past several months, Proposify’s revenue has been growing at 40-60% month-over-month.

And while this can’t simply be attributed to good customer service, there’s a part of this story that surprised Kyle (and even me, the guy who’s constantly trumpeting the value of great customer service).

As part of Kyle’s customer support efforts, he wanted to make it easier for customers to get help. After all, research has shown that reducing customer effort creates customer loyalty.

As it turns out, that same principle can help increase conversions, too.

Proposify added customer support help widgets all over their website. These widgets allow visitors to easily contact the support team, or to find an answer for themselves in Proposify’s knowledge base.

When Kyle looked at the numbers in Proposify’s KISSmetrics dashboard, he was stunned:

Over a period of two months, the company’s overall average trial-to-paid conversion rate was 9.85%.

However, users that clicked on one of Proposify’s help widgets converted at 25.23%! 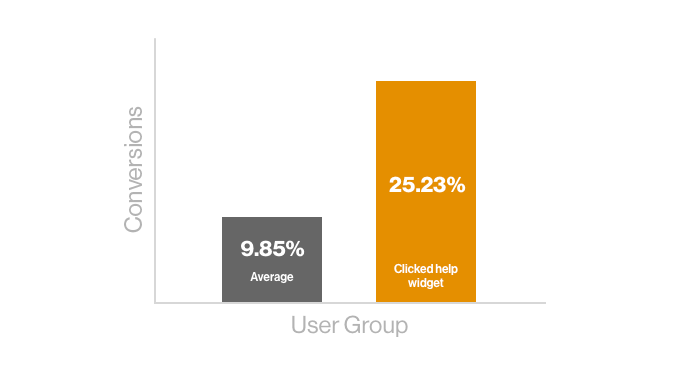 That’s a 156% increase in conversions, simply from making customer support easily accessible (and drastically reducing abandonment in the process).

At Groove, we’ve found much of the same to be true.

Early on, we learned that trial users who emailed us for support were nine times more likely to convert to paying users. 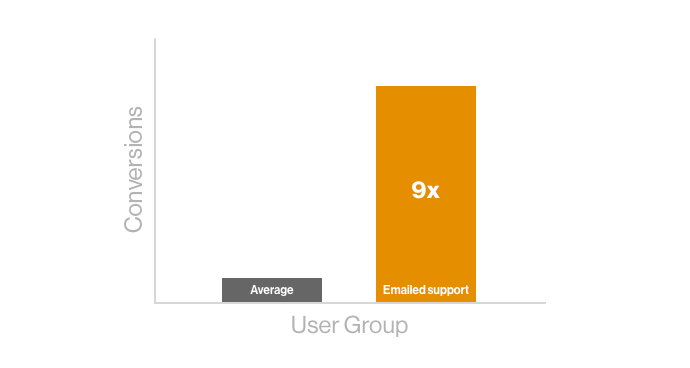 When the customer rated their support interaction as “Awesome,” that number jumped another 8%!

In fact, the results were so compelling that we decided to test whether we can get even more customer support emails.

We tried everything from adding support widgets to more of our pages, to dozens of different email campaigns to nudge trial users to ask for help.

In the end, one approach stood about head and shoulders above everything we tested. It took a little bit more time to set up, but it was well worth it, and we continue to use it to this day.

We know how long certain tasks in Groove are supposed to take:

We had an inkling that users that were spending significantly more time than that might need a hand. So we built a simple system that would alert us when a user would spend too much time on a particular task in multiple sessions.

Why multiple sessions? Because we found that if we only used one session as the trigger, many of the users weren’t actually stuck, but had simply left a tab open and gotten distracted or gone off to do something else, and didn’t actually need help.

Then, we reached out with an email: 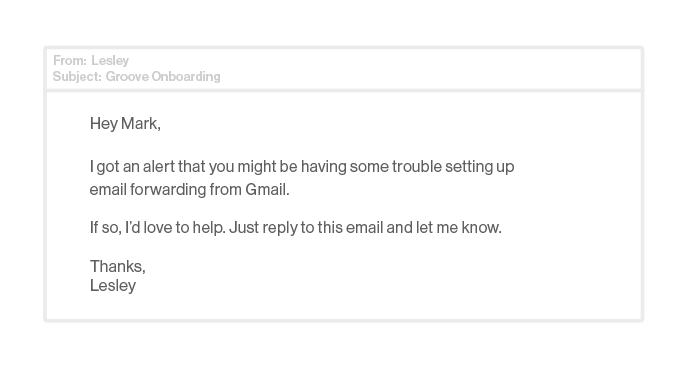 The email got a 10% response rate, and 30% of the users were still customers after their trial ended; more than 350% higher than our average free trial users.

So what’s the answer? Does better support = Higher conversions?

In a scientific, inarguable sense? We don’t really know.

But to me, these case studies suggest that for many companies, focusing on customer service can lead to big long-term conversion benefits.

We already know that good support can lead to other big business wins: 86% of customers are willing to pay more to do business with a company that provides superior customer service. 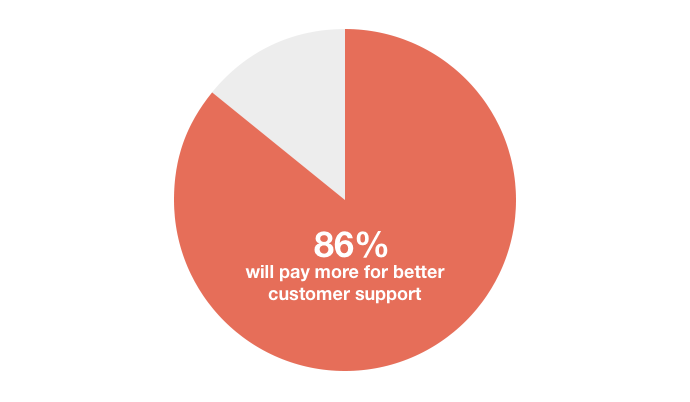 Good customer service have been shown to increase retention and referrals, too. 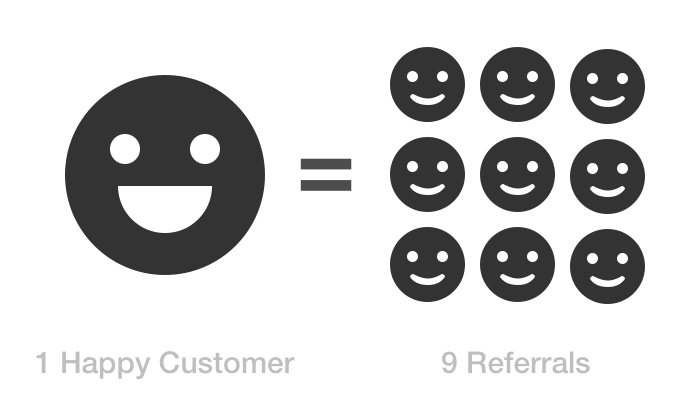 For that reason, there’s a good case to be made that better customer service can increase conversions on your campaign-specific landing pages, too.

Sustained, consistently excellent customer service can build a strong halo effect—a powerful psychological phenomenon—around your business; when people hear how good your support is, they’ll assume that you do other things well, too. When a prospect who’s heard of your company (and your great support!) reaches your landing pages, they’ll be primed to buy.

So, will good customer support help you increase your conversion rate?

It’s impossible to say whether it’ll help you without giving it a try.

But with the rest of the undeniable business-growing benefits that good customer service brings, you’d be doing yourself a disservice not to try.

A version of this post first appeared on the Unbounce blog.