It might sound fluffy, but defining our core values has transformed our business. Here’s how.

I rolled my eyes and let out a sarcastic sign.

It was just another in a series of doubts I had since we had first discussed [hiring a business coach][1].

On this particular day, four members of our team were huddled in a cold, cramped AirBnB living room in New York City, and our coach had just told us that we need to think about our company’s core values.

Core values isn’t us, I told myself.

Core values are something that big, slow, old-fashioned companies have. They’re meaningless, churned out by people who get paid to do nothing but churn out things like core values. And they get stuck on a cheesy poster, taped to a wall, looked at once⁠—if at all⁠—and forgotten forever.

I had barely finished my thought when our coach saw the skepticism in my face.

“And remember,” he said.

“Core values are not just words that you stick on a wall.”

“They’re not even the values that you want to live by; Help the community sounds like a great core value, but if you’re not already living it, then it’s not your core value.

Core values are the very best qualities of your team, distilled into a rubric that you can use to make better decisions, hire better people, and pass on the culture of your business to future employees.”

My skepticism began to fade.

I wasn’t 100% bought in quite yet, but I was willing to try this exercise.

And over the next 12 months, skepticism turned to excitement, pride and a massive feeling of accomplishment as the process of uncovering, verbalizing and celebrating our core values unfolded, leading to today, where not a day goes by when we don’t mention “core values” in Slack (without a hint of sarcasm).

Many of you⁠—especially in the startup world⁠—probably feel the same way that I did on that first day.

I don’t know if I’ll be able to change your mind. But I hope that I can convince you to at least think about your business’ core values.

As that first step⁠—just thinking about it⁠—opened the door to some big wins for us.

Why You Should Care About Core Values

You know that feeling, when you get a new car, or a new pair of shoes, or a new anything, and you start seeing that thing everywhere?

There’s actually a name for that: it’s the [Baader-Meinhof phenomenon][2]

Welcome to the Baader-Meinhof phenomenon, otherwise known as frequency illusion or recency illusion. This phenomenon occurs when the thing you’ve just noticed, experienced or been told about suddenly crops up constantly. It gives you the feeling that out of nowhere, pretty much everyone and their cousin are talking about the subject⁠—or that it is swiftly surrounding you. And you’re not crazy; you are totally seeing it more. But the thing is, of course, that’s because you’re noticing it more.

I can’t believe I didn’t see it before, but I sure as hell started seeing it quickly once we began working on our core values: nearly every company that I respect has them.

And many, many, many more. In fact, the more I dug, the more I found that nearly every successful business that I came across had core values recorded in one way or another.

There’s a good reason for this. These companies discovered the same benefits to core values that we discovered much later on.

After all, your core values are a big part of why you do what you do. And that why is what makes customers buy from you.

On this topic, if you haven’t watched Simon Sinek’s excellent talk, Start With Why, I highly recommend that you do so right now:

Shining a light on why you do what you do makes decision-making easier across the entire organization.

With strongly held core values, every difficult choice can be held up to those values, and the “right” answer becomes much clearer.

How We Uncovered Our Core Values

We spent a lot of time at that first meeting debating what those values might be, trying to pull our most deeply-held beliefs about our business out and onto paper.

But that was only the beginning.

We were inspired by [Chargify’s][7] [excellent post][8] on how they tackled their own core values. Perhaps unsurprisingly, Chargify works with the same business coach that we do.

From that post⁠—and from talking with them directly about their experiences⁠—we underwent our own core values development process with our team.

The approach we went with (also linked in the Chargify post) is “Exercise to Mars,” a process developed by Jim Collins, and explained well by John DeHart of Nurse Next Door (whose site, unfortunately, appears to have been taken down): 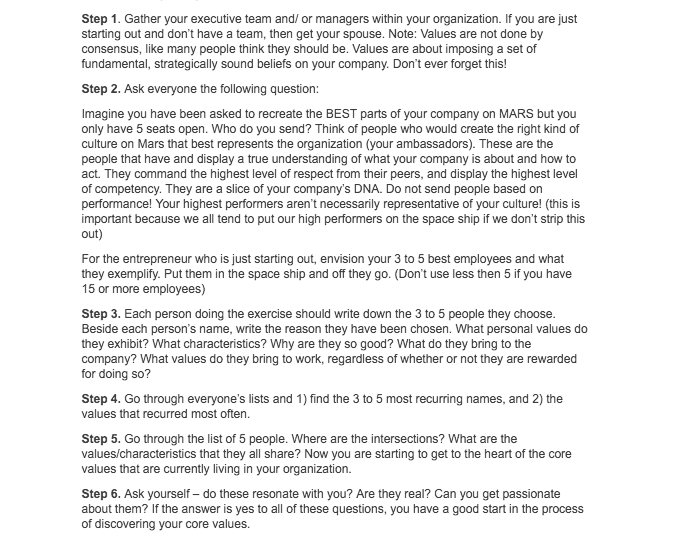 It was a long process⁠—nearly a year⁠—but finally, we settled on a set of core values that we felt truly represented our business and our team:

While we didn’t set out to fit our core values into a surfing-related acronym, we realized late in the process that the values we had chosen could actually be stated that way; to us⁠—and especially me, a near-obsessive surfer⁠—it made the values even more meaningful.

Once we had our core values settled on, we wanted to do everything we could to incorporate them into our daily work lives, so that they never risk becoming simply “words on a wall.”

We put our core values on the [About page][9] of our site, simply and clearly.

If we’re ever not demonstrating them in the way we interact with the world⁠—whether on our blogs, with our customers, with our partners, or anyone else⁠—we can get called out for it.

2) Began to use them in daily conversation

As lame as it sounds, we began to deliberately use our core values in our daily calls and conversations.

As we made product decisions or evaluated potential hires, we’d deliberate on which choice was more fun or scrappy, and use that to guide our ultimate direction.

But here’s a really important caveat: because we did this the way I outlined above⁠—pulling our core values out of our team, rather than pushing aspirational-but-not-existing values onto them⁠—this was not a stretch for us at all. In fact, we barely changed the way we spoke or thought, we simply noticed the emphasis on core values more.

To further assist in incorporating the values into our daily flow, we asked the Chargify team to help us customize the Slackbot that they had built for their own core values for Groove.

Adam and Zac were incredibly generous and kind to help us, and within a couple of weeks of our initial conversation, we were able to install SURFSbot, our very own core values Slackbot. 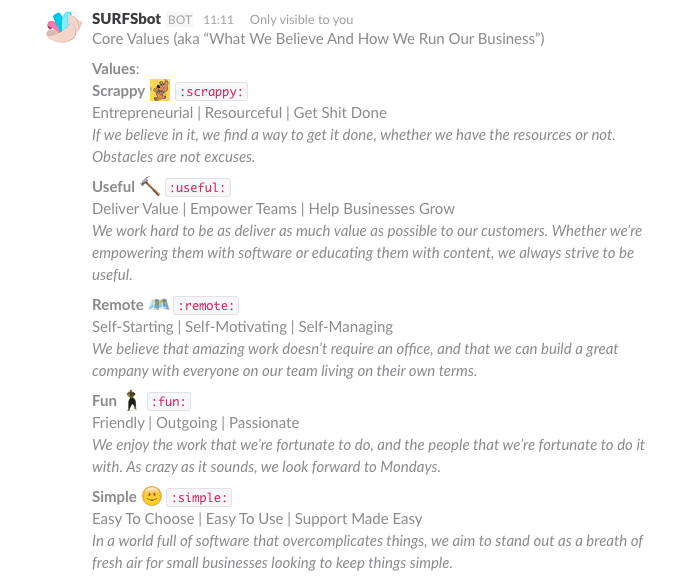 The bot lets us give props to our teammates for exemplifying Groove’s core values.

The Wins Have Already Started

About halfway through the core values development process, it was time for us to make a new hire.

We wanted to bring another developer on board, and we were fortunate to have a high number of very qualified candidates.

Ultimately, the decision came down to a few finalists, and we were a bit puzzled by the choice. But then, we decided to take our core values for a “test drive.”

We evaluated each candidate based on the core values we had identified, and there was one very clear winner.

That winner⁠—Glenn⁠—has been on our team for several months now, and has been an absolute home run for us.

We’ve started a couple of hiring processes since then, and we’re applying the core values filter very carefully to all of them. It has resulted in much better finalist candidates for us.

Additionally, we’ve had much smoother planning sessions at our quarterly retreats. Product planning decisions have gotten easier, as have marketing and customer support ones.

Having well-defined core values has helped us to function better and faster as a team.

If you haven’t worked on core values yet, I hope that this post has convinced you to at least consider what your business’ core values might be.

I was certainly skeptical at first.

And the task⁠—if you do it right⁠—of uncovering and immortalizing your core values is hard work.

But it’s been tremendously worthwhile for us, and I think it would be for you, too.